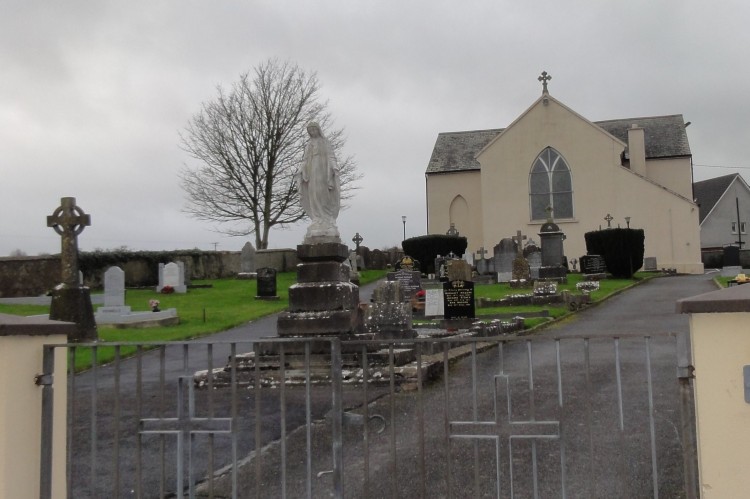 St Brendan’s Church Stoneyford
Stoneyford is in the townland of Cotterellsboley (formerly Hammonds boley) is in the barony of Knocktopher. Stoneyford developed at the time and directly as a result of the building of the Merino Factory in Ennisnag.
The village of Stoneyford was built by William Perry who was an absentee Landlord.
Stoneyford was called after the ford stream which flows through at the end of the village and joins the Kings river at Ennisnag.
The name locally is pronounced in Irish as Auch- Sthooin, i.e. Ath Stuin Fort of the Stang.
Prior to the building of the first Bridge, a humped backed bridge in 1810 this stream was crossed by large footstones placed in the stream. The old bridge replacing the present bridge in 1927 was built by Edward Long and Sons of Ballyhale.
The Church was built in 1815 and dedicated to St Brendan. It replaced a wooden thatched Church dating from approximately 1788 which stood to the rear of what is now O’Dwyers Garage in the main street. It belonged to the Knights Hospitallers of Saint John of Jerusalem. The ford river formed the boundary of Aughavillar parish until 1857 when Lawcus was added from Danesfort and Aughavillar parish was thus extended to the Kings river.
Stoneyford prior to 1801 consisted of very few houses it gets no mention from William Tighe’s Survey
In 1839 it consisted of 74 houses and had a population of 445.
In 1849 Griffiths Valuations records Stoneyford as having a Fever Hospital and a Dispensary, a Roman Catholic Church, and National school, an Infant School a Male and Female Adult School and a charitable loan Bank, and a Petty Sessions House (court House) and A Constabulary Barracks.
The Flood Memorial School was built in 1820 and The Old National School was built in 1840.
With the closing of the Merino Woollen Mill in the 1820’s, emigration, and the famine in 1847, Bassets Guide of 1884 show that the population for Stoneyford was now 200.

A great many of the houses were unroofed but those standing were slated.
Stoneyford was approximately seven miles from Kilkenny and approximately three and half miles from three railway stations, Thomastown Ballyhale and Bennettsbridge.
The land in the area was of good quality for both tillage and pasture.
Stoneyford was surrounded by the Estates of Henry Meredyth at Norelands Lord Carrick at Mount Juliet, the Floods of Flood Hall , the de `Mont Morency and the Wemyss estate of Danesfort.
The Reverend James Graves, Mrs Meredyth, Mr Jeremiah Nolan and Mr A M Murphy were the proprietors of handsome private residences in the neighbourhood.
Stoneyford had neither fair nor market. The Petty Sessions were held on the second Thursday of each Month. The Petty Session House is now Brennans Garage.