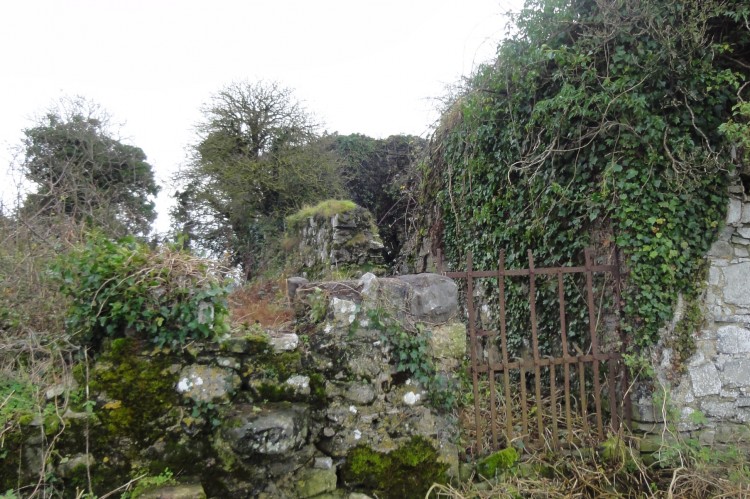 The local Irish sound of the name is Awnamulth (Ath-na -Molt) i.e. Ford of the Wethers. Some time between 1221 and 1229, William Marshall Jnr, Earl of Pembroke, "granted to the Abbey of St Saviour of The Cistercian order in Dowyskir" (otherwise Duiske , now Graiguenamagh), for the souls of himself of William Marshall Earl of  Pembroke, his father and of the Countess Isabella, his mother, lands, possessions, liberties and free customs, namely: the land of Dowyskir, Athemolt (now Annamult) for 11 carucates of land;

The townland of Annamult is thus found , at this early date, among the temporal possessions of Graiguenamanagh, otherwise Duiske Abbey, and it continued so till the suppression of the monasteries by Henry V111., in 1540.  Traces of its occupation by the monks still remain at Annamult, in the broken ruin called the "Friars Barn" also in the site of the "Friars Chapel" which is still pointed out at the distance of 100 yards from the Barn.  There is also here, just beside the Barn a big ancient castle called the "Friars Castle" and the "Castle of Annamult". The Castle and Barn together with the Chapel and other buildings, now level with the ground formed the monastic "Grange of Hanumolt"  which the Abbot of Graiguenamanagh was forced to surrender to the commissioners of Henry V111 at the suppression of the Religious Houses.

It stands in the townland of Annamult, about 400yds, east or south-east of the Friars Barn.  Its local name is Baeal-bawr, i.e.  Beul-Bairr, (The gap or opening in the hill). The name is perfectly appropriate, as the Church stands in a very narrow gap, towards the northern end of a low ridge. The Church dates from about the 9th Century.  It is rectangular in shape, the walls which are still substantial, being built of large stones.  There were originally a door and a small window in each side wall, and a small window in each gable, but all are broken and their features destroyed.

There is no Holy Well nor memory of a patron Saint associated with Beul- Bairr.

Major J Grove White, gave an account in 1892 of Beul-Bairr in stating the Church was in ruins only for four walls standing, the Churchyard was enclosed by a very substantial stone wall about four feet high, built at the expence of the late Mr Maurice FitzGibbon ( the white knight) of Crohana, Stoneyford Co kilkenny.

This boundary wall now has several breaches in it, and in a collapsed state, and has been replaced by wire fencing.  The graveyard enclosure itself would be approximately one 1/4 of an acre.  All the  recorded burials are within the confines of the Church but numerous  stones placed  in the enclosure suggest unmarked graves.

With regard to the Holohan memorials there appears to be varients in how their family name is being spelt.

The Lewis Survey of 1837  Annamult otherwise Aghnamolt  a parish in the Barony of Shillelogher the County of Kilkenny and Province of Leinster six miles south from Kilkenny containinng 458 inhabitants.  It is situated on the river Nore which here receives the Kings river, on the high road from Stoneyford to Kilkenny by Bennettsbridge and contains 1664 Statute acres.

Mr Neville of Annamult House at the mouth of the Kings river introduced modern improvements, new implements of tillage and good stock.
Tighe also stated that the anciently  monastic lands at Annamult were tithe free,  and the value of these lands was generally high and well improved.

The ruins of the Church called Teampall Beal- barr, in the townlands of Athnamult, i.e the Ford of the Wethers, the side walls and the gables  remain, there is a round headed window in the west gable four feet high and four feet wide on the inside, two foot nine inches high and five inches in breath outside. There is a doorway twelve feet from the west gable in the southside, three feet seven inches wide on the inside, and three feet ouside. the top is broken away so that its height cannot be ascertained and two (of the cut) stones only remain in each side.  There is a broken window in the same side, nineteen and a half feet from the door, there is a broken doorway in the north wall.  Opposite to that on the south a broken window between it and the east gable.  There is a round headed window in the east gable five foot high and four feet four inches wide inside, three feet six inches high and ten inches wide inside, Three feet six inches high and ten inches on the outside, the cut stoned removed from its south side in front.  the walls are two and a half feet thick, well built with large square stones and strong lime and sand mortar.  The doors and windows built up with well cut brown grit stone.  There is a small burial ground attached.

There is an old Castle called the Friars Castle about a furlong north of the Church in the same townland, 25 feet by 19 feet the first vaulted floor remaining.  The door is on the east side with the cut stones taken away, it has thirteen windows and sixteen loopholes, the cut stones of which have all been carried away.  The walls are 6 feet thick there is a ruin about  200 yds south of the Castle which they call the Friars Barn, This ruin (the three gables of which only remain) is 32 yds long and 15 yds wide having several air holes through the walls which is 2 feet 6 inches thick.

Reverend William Carrigan,  History and Antiquities of the Diocese of Ossory. 1905