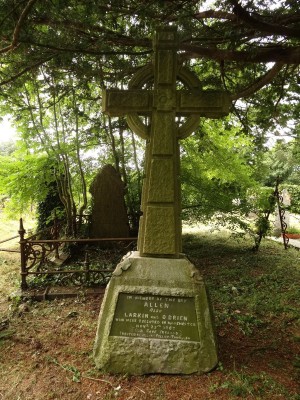 This is not a burying place rather a commemorative cross. Efforts have been made to return the bodies from England. For more information contact John Desmond.

William Philip Allen was one of the Manchester Martyrs affectionately known as Allen Larkin and O’Brien. Allen’s father, a protestant, was the keeper at the RIC barracks called the Bridewell at Kilbrogan Hill.

James Stephens, a draper in South Main Street introduced Allen into the Fenian organisation, known as the Irish Republican Brotherhood in 1864. William Philip was received into the Catholic Church by Canon O Brien on the 20th  June 1866. He was arrested in Manchester on the 18th September 1867 and wrongfully hung with his two friends at the front of the New Bailey in Salford England on the 23rd November 1867. It was the second last public hanging to be held in England.

The Dublin man that fired the fatal shot escaped from the scene and made a clean getaway to New York, where he lived for many years, eventually returning to Ireland and dying in his native city. (Peter Rice)

The Celtic Cross monument was erected to William Philip’s memory by his fellow Townsmen.