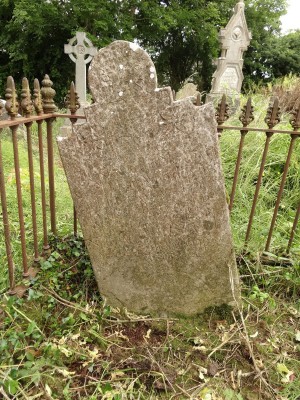 This is erected in Memory of

18 Years  May they rest in peace

Remember Death from which you cannot fly

and conquer sin to gain eternity.

Behold you man that do pass by.

As you are now so once was I

As I am now so must you be

Most Rev. Dr. Delaney, Bishop of Cork was born in the Sacristy attached to the local Church on Christmas day 1804. His father, a weaver by trade, and his mother a member of the Quinlan family, lived just beyond Kilbrogan Street, near the well, which is still known to locals, as the Bishops well. He was ordained at the age of 24 and having spent some time as a curate in Cork city, he was appointed Parish Priest of Bandon in 1845. Two years later as the famine stalked the land; he was made Bishop of Cork and ruled the Diocese for 39 years. He died on the 14th November 1886 and was interred in the cemetery at the Ursuline Convent Blackrock.

What would Bishop Delaney’s reaction be today if he knew that Bandon Parish, and the Diocese of Cork & Ross have turned their backs on this historical Church and Graveyard, which is the home of seven forgotten priests and many more, buried in un-known graves, who died labouring on behalf of their starving and plague stricken parishioners during the Famine and Penal times.