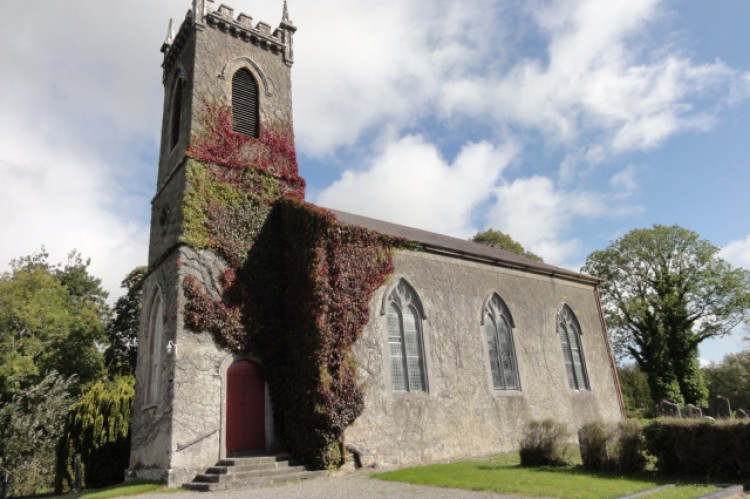 St Peters Ennisnag is situated at the crossroads of Ennisnag. Set within a triangle where the tributary stream the Bata Dubh or Black sticks, enters the Kings River. It is an Ecologically protected area, teaming with wildlife. With the Church Belfry and three local bridges, there are a number of Bat Species which are being closely monitored.
The Graveyard is well maintained with the Catholic burials to the rear and the Church of Ireland burials to the front.
According to Canon Carrigan an ancient Church stood on the site from time immemorial to after the Cromwellian era and it appears as a prebend in Papal taxation 1291 (Leslie). Carrigan states in Vol V1 chapter 1
" The Treasurer of the Diocesan Chapter had the Prebendel of Ennisnag from the 15th Century" Also Carrigan XXV11 we found that the Diocesan Chapter of Ossory consists of a Dean, Archdeadon, Chancellor, precentor and Treasurer and can be traced back to Felix O' Dulaney 1178 - 1202 who was the first Abbot of Jerpoint Abbey and later Bishop of Ossory. In the list of Churches or Parishes possessed by these down to the Reformation in the 16th Century, we find that the prebendel Church of Ennisnag from the 15th Century. This is referred to in Hogan's guide (pages 343, 358, 359,360) "By the authority of Pope Nicholas 1V 1291" taken from "liber ruber Ossoriensis" which, according to Hogan, page 340, is still preserved in the Protestant Episcopal Palace. He also Says Rev. James Graves holds a correct transcript of it, Ecllesial De Inisnage Prebend -£ ix. In 1403/4 John Nugent was presented by the crown to the Prebend of Ennisnag which is the core of the Treasureship.
The Irish form of the name is Inis-Snag (Irish speakers call it Innisnogg).

The annals of the Four Masters enter under the year 745 "the battle of Inis Snag by anmchaid, son of Cucearca", and under the year 889 they have the entry "Suadhbhar, i.e. the son of Coiteadhach of Inis Snag, died. He was an anchorite.
The patron saint of Ennisnag was St Mogue-Moling,"Mo'Aod Og" in Irish this means (My Young Hugh) "Son of Hugh" Hugh was Bishop of Ferns and originally came from Templeport in County Cavan. His feast day was celebrated here on the 14h of February. Tober Mogue or St Mogues Holy well may be seen on the roadside about 300 yards north of the Church yard. A pattern was held at this well untill the beginning of the 19th Century
The County Council erected a pump here in 1948.
In 1615 the Church was in ruins. In 1799 the Prim family were the only Protestant family in the Parish and the curate thought the Catechism at their house. Around 1800 three industrialists from England Timothy Nolan Thomas and Robert Shaw established a large Merino Woolen Mill on the boundary of the Parish and brought a number of Manufacturers professing the Protestant religion. On October 9th 1814 it is recorded in a Diocesan Register Memorial that they asked for a grant to build a new Church as their was no Protestant Church in the area and now there was seven Protestant families in the Parish. Ther new Church was built by a grant of the board of First Fruits of about £900 and was consecrated on the 30th June 1816. This Church was dedicated to St Peter. A lease of land for a way to the Church was granted by Robert Harty Length 120 ft width 26 ft. In 1936 Sir Lionel Harty gave the strip of land between the Churchyard wall and the stream to the graveyard. Some of the materials used in the new building came from the remains of the old Catholic Church. From a beginning of seven families attached to the Protestant church at Ennisnag in 1816 the parish expanded a large part of Burnchurch Parish was added to Ennisnag parish in 1899, and Knocktopher parish was added in 1942. Today the Revd Martin Hilliard, Rector of the group of Parishes looks after a large area comprising Ennisnag, Kells, Kilfane, Ballytobin, Kilmoganny, and Inistioge.
Pre 1827 the Waterford to Kilkenny road branched off to the left after Stoneyford and over the old 12th century bridge (the oldest toll bridge in Ireland), and came out at the crossroads of Ennisnag.
A new bridge over the Kings river was built in 1827 and was reputed at the time to have the widest span of a cut stone bridge in the British Isles. In 1938 a section of the Churchyard wall was removed and rebuilt by Patrick and Thomas Duncan stonemasons to take the portion of ground purchased from ML Potter of the public house by the children of William Henry and Dora Eleanor Mosse and presented to Ennisnag Church in memory of their Parents. This is now the Protestant graveyard in front of the Church.