Brambles and Fireballs in Carlow - A Visit to Pollerton Little. 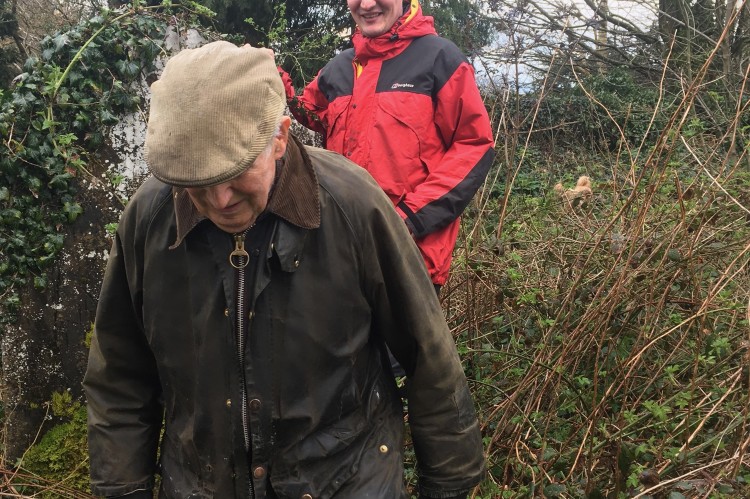 Seamus and Joe picking their way through the brambles inside Pollerton Little graveyard.

On the old Carlow town to Baltinglass road is a small, overgrown graveyard. It bears the name Knockaunarelic - the small hill of the graveyard - and it is located in the townland of Pollerton Little. I thought Pollerton was going to be a local landlord's name but it is in fact related to the limestone solid geology beneath - sinkholes giving the name 'townland of the holey ground - Baile Pholaird Beag'.

We visited Pollerton Little because a local community group want to look after it - give it a cleanup and they want to do it right - taking a care and conservation approach to the place. The little graveyard was enclosed, in 1823 or thereabouts is the story locally, but it would appear they only enclosed what they could afford and burials have been found outwith the limestone wall. This is a common occurence in Irish burial grounds.

Our challenge with the local group is how to clean it up without causing damage or disturbance and without breaking any rules. First step is to notify the relevant government department with a proposed works programme and the second step is to get funding. Some would say step 1 should be get the funding but an important lesson we have learned about with community surveys is 'not to worry about the money'. Usually something comes up.

Leading the local team is Dr Seamus O'Murchú - here we see him and his neighbour Joe. Joe lead ius through the overgrown graveyard - brambles are waist and chest height even though the place was last strimmed in 2014. The local team will hold a 'meitheal' - inviting neighbours to bring strimmers and hedge trimmers to cut the brambles and rake up any remains. We'll have to avoid disturbance to wildlife so timing will be important. Autumn is alway the ideal time for these kinds of clean-ups but we don't always have ideal conditions to work with.

Seamus is an archaeologist and I think his family have lived in this area for a few generations - he has many stories about the graveyard including a folk belief in a fireball which connect the Knockaunarelic with a nearby Friary and which when seen is a harbinger of death.

If you wish to support this or any other community group to survey their graveyard then please consider making a donation to the project.