Skip to main content
Home /Blogs /John Tierney's blog /How much did a funeral cost in the 1880s? Thompsons of Waterford.

How much did a funeral cost in the 1880s? Thompsons of Waterford. 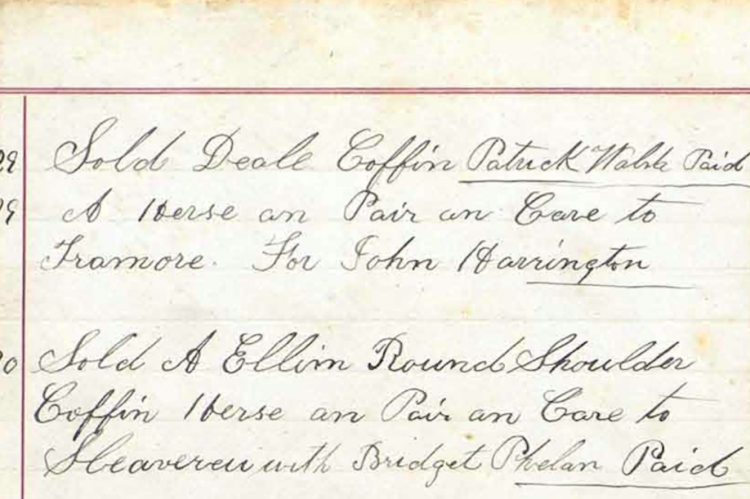 A question often asked during graveyard surveys is ‘how much did a funeral cost in the past?’ - to which I’d often reply that we need to see a undertaker’s account books to get an answer. The first undertaker’s accounts I have seen were shown to me by C J Destelle-Roe of North Tipperary and that account book contained a lot of important clues to understanding early 20th century Templemore.

Now, Waterford County Council have combined with Thompson Funeral Directors (opened in Waterford in 1786) to put their historic registers online. This is an excellent resource and a quick examination gives immediate reward.

Reading the registers it strikes me that literacy was just as much an issue for undertakers clerks as it was for stonecutters. The 19th century register is written with phonetic spellings - elm is ellim, car is care, hers for hearse so that lesson we have learned in graveyards is repeated here- the actual spelling doesn’t overly matter once you convey the intended meaning.

So the Walshes bought a deal (pine) coffin for 14 shillings and nothing else. John Harrington must have had another supplier for the coffin as they hired a hearse, and a carriage with a pair of horses (no price indicated). While Bridget Phelan bought the full package - an elm coffin with hearse, pair of horses and carriage - all for 2 pounds.

Here we see a corner of the register for two funerals in january 1880 which can be read as follows.

These are marvellous documents for the social history of the city and also its hinterland in east Waterford and south Kilkenny.

If you wish to support community groups to survey their graveyards then please consider making a donation to the project and write to john@historicgraves.com with any ideas you may have for surveys.