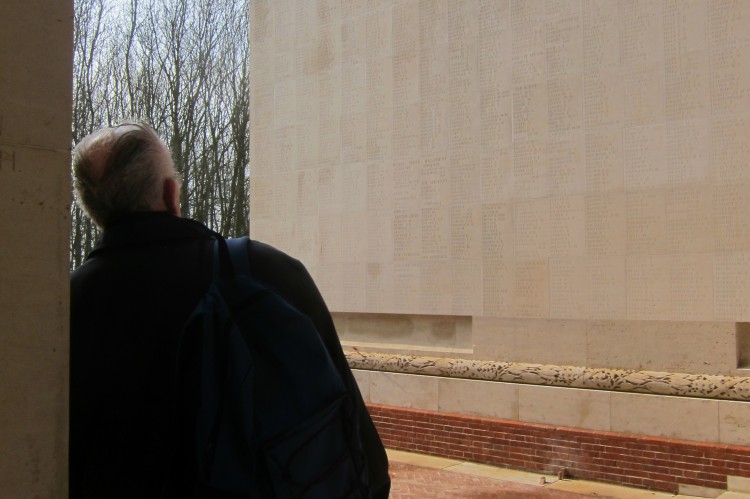 My dad seeing his grandfathers name on the Thiepval memorial for the first time.

On this day 98 years ago my great grand father died in Northern France in the Battle of the Somme. Why was a Maher from North Tipperary fighting the Germans in France?
We will never know why John Maher(7604 Royal Irish Regiment) signed up.
Was he loyal to the crown?
Was he volunteering to achieve home rule (http://www.historyhub.ie/)?
Did he sign up for a regular wage in order to feed his family?
or did he go out on the skite with his brother-in-law (Robert Stapleton who also died in 1916) and make a mistake which cost him his life, and his family a father and husband. My fathers generation knew about John Maher and Robert Stapleton but our generation did not hear about him until recently. When I asked Bill Martin (of http://generalmichaelcollins.com/) why he thinks such matters were not talked about in Irish households his answer rang true - "We did not talk about those things John but the problem is we did not talk about anything!" - the Irish can be genial at times but are private all of the time and I think the hard times which followed the foundation of the state meant many people did not rake up the past because they were too busy getting through the present.
As for me, I am proud of his memory and saddened by his loss. What would my grandmothers' life had been like if she had her father nearby throughout her life? What would my own dad's life have been like with his grandfather around?
We live with losses we know little about but feel the effects of every day.
Notes
When we went to visit the memorial at Thiepval we used Google Maps to plan and keep records (http://goo.gl/maps/Ejwr - not all points were relevant but the system was very useful). We came across some of the Pen and Swords books which were most helpful particularly Walking the Somme by Paul Reed and Delville Wood by Nigel Cave. Now when I come across Commonwealth War Graves (http://historicgraves.ie/project/kilkenny-military-heritage-and-graves-project) which are similar to John Maher's details (http://historicgraves.ie/holy-trinity/kk-dnmr-0001/grave) I wonder did he know these people? As we strolled the streets of Albert in Picardy we all wondered did the Royal Irish Regiment walk these streets at any stage? Where were the men billeted? As we drove through the rolling hills overlooking the Somme river we wondered which trenches were John and Robert Stapleton in?
Blog category:
Events