The Place of Their Resurrection 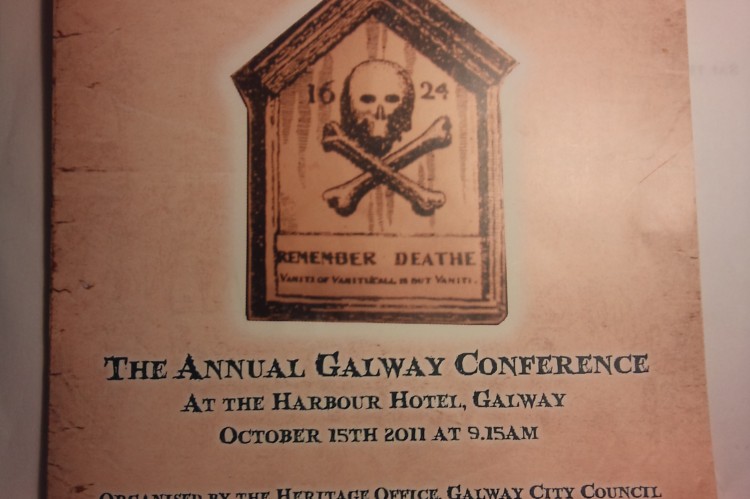 The inaugural Annual Galway Conference – The Place of Their Resurrection: cemeteries and funerary monuments their past and future – was held last Saturday, the 15th October, in the Harbour Hotel in Galway. The event was organised by Jim Higgins, the Galway City heritage officer and was funded  by Galway City Council and the Heritage Council. The conference was an action of the Galway City Heritage Plan. The Historic Graves project delivered a talk on community graveyard surveys and spent a great day discussing graveyards with a small but committed group of like minded graveyard enthusiasts.

Proceedings were opened early on Saturday morning by Galway City Cllr. Ollie Crowe who was standing in for the Mayor of Galway, Cllr. Hildegard Naughton.
Sandra Coffey followed up with a discussion of the tourism and heritage potential of Mausolea. Sandra highlighted the work done in conserving the amazing looking Dennis Mausoleum in Clonbern Co. Galway.
(Just today Jimmy Deenihan TD, Minister for Arts, Heritage and the Gaeltacht launched ‘Clonbern Graveyard its Monuments and People’ published by the Follies Trust. The publication aims to raise awareness of Ireland’s rich heritage of follies and marks the conservation of a significant structure – the Dennis Mausoleum. The Mausoleum is located in a Galway County Council owned graveyard and dates from 1863. It is a rare example of a cast-iron mausoleum and is in fact the only one of its kind in either Ireland or Great Britain.)

Dr Siobhán Geraghty provided us with a wealth of information on wildlife and biodiversity issues in graveyards. Some great examples revealed how these elements really underpin the atmosphere experienced in an historic graveyard.
The Galway Family History Association West delivered a talk on their fantastic resources and explored some of the sources available to family history researchers for county Galway. The history and depth of engagement with Galway graveyards extending back 150 years really shone through.
At lunch time after a quick cup of coffee and a sandwich  we nipped out and had a look around Forthill cemetery which is located opposite the Harbour Hotel and is a place steeped in history and will require a thorough exploration at a later date.
Directly after lunch Jeremy Sterling and Laura Soler Lazero from the Earth and Ocean Sciences Department in NUIG shared the preliminary results of their work in St Nicholas’ Church. They have been applying Ground Penetrating Radar to surveys of the interior of the church. They appear to have found some undocumented graves below the surface in undisturbed areas of the interior.
Christy Cunniffe the County Galway Field Monuments Advisor explored the legislative context for graveyards. He followed this up with an exploration of some of the more unusual iconography and symbolism he has observed in Galway graveyards during his extensive engagement with them. There is not a week goes by when Christy is not exploring a Galway historic graveyard.

Lastly Jim Higgins took us on a fascinating trip across and through the 29 places of burial in Galway City. Jim believes that some of the earliest headstones in the country can be found in Galway City. He has documented numerous 17th century examples with family names like Lanfear, Kingcorne, Nordin and Jenckin. To round off a hugely enjoyable day we then went and had a look at some of the wonderful memorial monuments located in and around St Nicholas’ Collegiate Church located in the heart of Galway City.
The presentation delivered by the Historic Graves project is available to view online.
http://prezi.com/8ihimmzwoeik/the-historic-graves-project/
Blog category:
Events