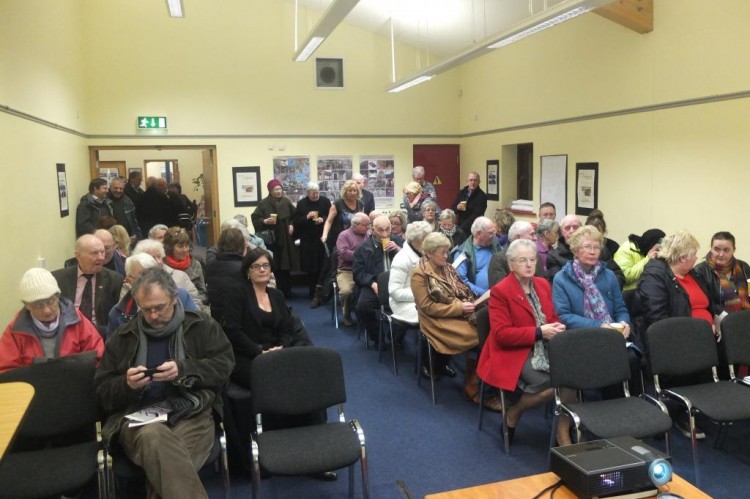 There was a huge turnout at the launch of the Historic Graves information leaflet in Westside Library in Galway City. The launch was the first in a series of events planned by the library to mark their 10th anniversary in their fantastic facility. The information leaflet was produced by the Historic Graves project and was based on the results of an intensive photographic and inscription survey of all the grave memorials in the old graveyard which was undertaken in September 2013.

The survey was commissioned by Jim Higgins the heritage officer with Galway City Council and was funded by his office and the Heritage Council (hear some audio from Jim below). It is another example of how funding from the Heritage Council percolates down to local communities throughout Ireland providing the impetus for a staggering array of vital initiatives. Galway City Mayor, Padraig Connelly was on hand to formally launch the leaflet and a number of city councillors were in attendance. The mayor was introduced to the large crowd who had gathered in the library by Peter Rabbite from Galway’s library service and by Cora Gunther the librarian in Westside (hear Cora talk about Westside Libraries programme of events below). It was particularly fitting that mayor Connelly launched the leaflet as the survey revealed that the most commonly recorded family  name in the graveyard were variations of Connelly.

The mayor recognised the importance of heritage to the life of a city like Galway and complemented the heritage office on the great work it undertakes. He highlighted in particular the quality and number of publications for which Jim is responsible each year. The mayor outlined the reach that publications like the Old Rahoon Graveyard leaflet and the Galway Heritage Magazines have and the power that such publications have in promoting the heritage of Galway city to audiences from near and far.

Following the formal part of the evening John Tierney from the Historic Graves project gave a brilliant rousing talk about the survey and the publication both in digital and hard copy format of the results. The graveyard is tucked away opposite the larger and more famous Rahoon graveyard. It is a quite peaceful place which unfortunately attracts some late night anti-social behaviour. It is hoped that the level of public awareness about the graveyard and its history as a result of the survey will encourage a more positive view of the graveyard as a place for all the community to enjoy. The interest shown in the launch of the leaflet by the local community around Westside bodes well for this aspiration.

John showed how the survey was undertaken with a mixture of low tech solutions like using masking tape to number the memorials and high tech GPS enabled cameras. The hard work put in by John and his colleague on the Historic Graves Project Jacinta Kiely in recording all of the inscriptions from the predominantly flat ledger slabs in the graveyard was evident. So too, however, was the obvious joy taken from the way the graveyard slowly revealed its treasure trove of  local family names and stories. All off the inscriptions and memorial photographs have been published on the Old Rahoon Graveyard page on the Historic Graves site. John wowed the crowd by showing a simple graphic which illustrated all of the family names from the graveyard. The more frequently a name occurs in the graveyard the larger it will appear. (These can be created very simply by using a website called wordle). The reaction to the graphic from people in the room illustrated like nothing else the power of the names to evoke interest and wonder.

John congratulated Jim Higgins for having the vision to commission the leaflet as well as the survey as it is through the availability of resources like the leaflet that people can be encouraged to come and visit the graveyard to see their family names carved in stone and then to wander on to the wonderful local library to do some further research into their genealogical origins.

Following the talk there was some lively debate and questions were fired from the crowd. Both Jim and John did a sterling job answering most of them.

The launch was the first in a brilliant programme of events being hosted by the library over the course of the year. One that immediately caught my eye was billed as a night of Reminiscences about the area around westside which is taking place on Wednesday the 5th February at 6.30pm. A lovely booklet outlining the events is available from Westside library.

The leaflet on Old Rahoon Graveyard will be made available via the Heritage Office in City Hall, College Road, Galway.

Below are some audio clips which were recorded on the night.