The Gathering rolls into Roscommon 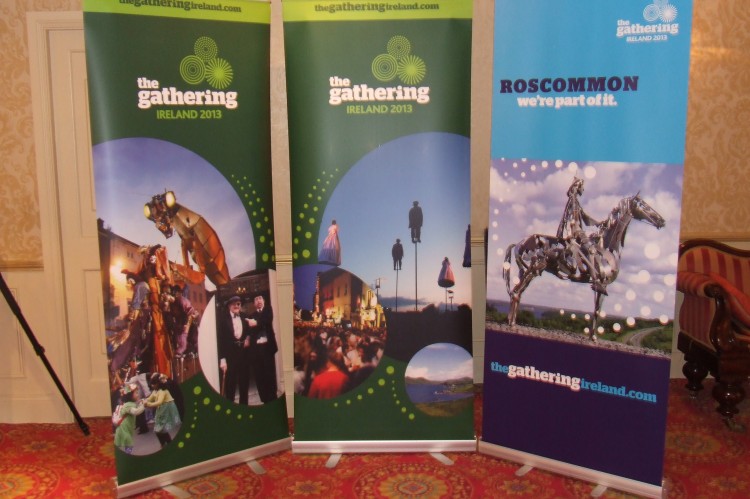 There was a huge turnout in Roscommon last night for the first of the Gathering Ireland community events. These events will be taking place in every county in Ireland over the coming months and are an opportunity for the gathering team to spread the message about what the gathering is and for communities to learn how to become involved and to generate ideas for local gatherings across the country.

The MC for the event was RTE journalist and proud Roscommon man Ciaran Mullooly. The Mayor of Roscommon Cllr. Eugene Murphy was on the spot to welcome

all the attendees and promised his full backing and encouragement. The Gathering can be a hard thing to pin down and the first definition of the evening was offered by Ciaran Mullooly when he described it as ‘a Hooley and a yearlong celebration’. Ciaran expressed the hope that the evening would be about ideas generation and judging by the buzz of conversation during the first discussion session that wasn’t going to be a problem in Roscommon.
The conference room in the Abbey Hotel had been divided into circular tables and at each table was a local facilitator. The 200 + attendees all took a rigorous part in the discussion sessions and some brilliant ideas were captured.

Super ideas coming out of the Roscommon meeting, vet reunions, star gazers,family gatherings, you name it, Roscommon will have it in 2013!

Following the first discussion session the director of the Gathering project Jim Miley took to the microphone to explain in more depth what he felt the Gathering was about. Jim believes that the Gathering is simply about getting people with emotional ties to Ireland to come and visit in 2013. This will in turn help a national recovery and get revenues flowing to local communities. Jim defined a gathering as ‘anything more than two people together’ and went on to relate how the Miley family will be inviting their American cousins back to Ireland in 2013.

Jim Miley says The Gathering is about what we can do for ourselves & for our community. twitter.com/GatheringIRL/s…

This was the thrust of what Jim had to say. That while there are headline events being organised throughout the year the important thing was that everybody would play their part and would ask people to come. If this happens then the targets of bringing 325,000 extra visitors into the country and generating 170 million in increased revenues will be met.

The Gathering website has lots of resources for those planning to organise local gathering's and it will also become a key marketing tool in promoting these Gathering's as they move from planning to reality. There is a dedicated Gathering team currently working on the upcoming community events and at the same time developing supports and marketing strategies to promote the Gathering events in 2013.
I caught up with Imelda Rey a member of that team and she agreed to answer a couple of questions.
The Historic Graves Project is actively working with local communities to record their historic graveyards and related multimedia stories. We hope to play our part in the Gathering by continuing to build a resource in partnership with local groups which will encourage visitors to come to Ireland in 2013 and also to provide authentic experiences that will engage them when they do come.
Blog category:
Events