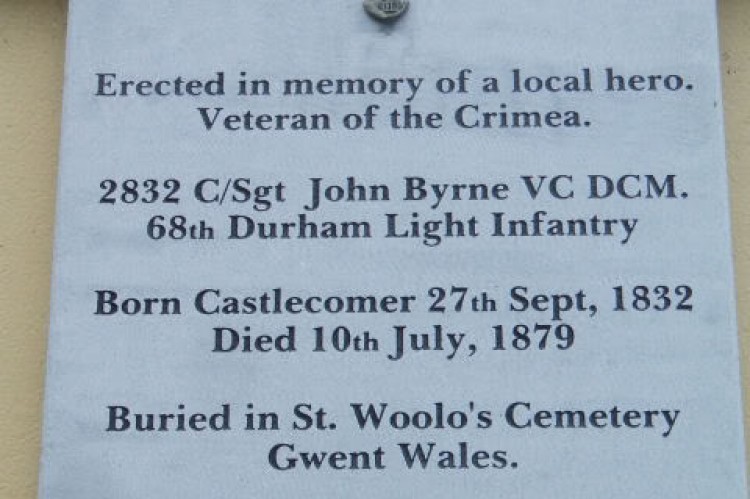 The Victoria Cross instituted by Queen Victoria on the 29th Jan 1856 to recognise servicemen's brave acts regardless of rank. The football-size cascabels [knobs] from Canons captured in the Crimea were sawn off at the neck and melted down for VC production. When this actually happened is still open to debate. The priceless lump of metal, of which there remains enough for a further 85 crosses, is kept in a vault at the Royal Logistic Corps in Donnington, Shropshire. It can be removed only under guard. The design, chosen by Queen Victoria, consists of a cross patee ensigned with the Royal Crest resting upon a scroll bearing the words "For Valour." The reverse of the suspender bar is engraved with the recipients' name, rank and unit while the reverse of the cross is engraved with the date of the deed for which the recipient was honoured. The London jewellers Hancocks, based in the Burlington Arcade in London, make the medals. The bronze has always been unstable to work with as it has already been worked on when the cannon was made. Hancock’s have seven medals in storage but without the name and rank of the recipient and date on the back, they have no intrinsic value except their novelty. In World War Two, Hancock’s charged the armed forces the equivalent of £1.50 for a medal that today can fetch £200,000 at auction. It still remains the most coveted and probably the best known military medal in the world. Of the 1356 that have been awarded, 168 have been awarded to Irish born soldiers; coming from 31 of the 32 counties. Six of the 168 hail from County Kilkenny.

Private John Byrne VC DCM Born Castlecomer.68TH REGIMENT.
Dates of Acts of Bravery: 5th November, 1854; llth May, 1855.(Crimea.)
At the Battle of Inkerman, when the regiment was ordered to retire, Private John Byrne went back towards the enemy, and, at the risk of his own life, brought in a wounded soldier under fire. On the llth May, 1855, he bravely engaged in a hand-to-hand contest with one of the enemy on the parapet of the work he was defending ; prevented the entrance of the enemy, killed his antagonist, and captured his arms. London Gazette, 24th February, 1857.http://www.lightinfantry.me.uk/vcjohnbyrne.htm
Private John Barry VC  Born Kilkenny.1st Battalion Royal Irish Regiment.
Dates of Acts of Bravery: 7th and 8th January, 1901. (South Africa.)
During the night attack on the 7th-8th January, 1901, on Monument Hill, Private Barry, although surrounded and threatened by the Boers at the time,smashed the breach of the Maxim gun, thus rendering it useless to its captors, and it was in doing this splendid act for his country that he met his death. London Gazette, 8th August, 1902.http://firstandlast.ie/#
Private John Ryan VC Born  Kilkenny Date of act of bravery 26th sept 1857:A party, on the 26th of September, 1857, was shut up and besieged in a house in the city of Lucknow, by the rebel sepoys...Private McManus in conjunction with Private John Ryan, rushed into the street, and took Captain Arnold, of the 1st Madras Fusiliers, out of a dooly, and brought him into the house in spite of a heavy fire, in which Captain Arnold was again wounded.In addition to the above act, Private Ryan distinguished himself throughout the day by his intrepidity, and especially devoted himself to rescuing the wounded in the neighbourhood from being massacred.
Lieut. Walther Pollock Hamilton VC Born Inistioge For conspicuous gallantry during the action at Futtehabad on the 2nd April, 1879, in leading on the Guide Cavalry in a charge against very superior numbers of the enemy, and particularly at a critical moment when his, Commanding Officer (Major Wigram Battye) fell, Lieutenant Hamilton, then the only Officer. left with the Regiment, assumed command and cheered on his men to avenge Major Battye's death. In this charge Lieutenant Hamilton, seeing Sowar Dowlut Ram down, and attacked by three of the enemy, whilst entangled with his horse (which had been killed) rushed to the rescue, and followed by a few of his men cut down all three and saved the life of Sowar Dowlut Ram.
CSM William Frederick Hall VC Born Kilkenny No. 1539, COLOUR-SERGEANT FREDERICK WILLIAM. 5TH CANADIAN BATTALION.
Date of Act of Bravery: 24th April, 1915.On the 24th April 1915, in the neighbourhood of Ypres, when a wounded man who was lying some 15 yards from the trench called for help, Company Sergeant-Major Hall endeavoured to reach him in the face of a very heavy enfilade fire which was being poured in by the enemy. The first attempt failed, and a non-commissioned officer and private soldier who were attempting to give assistance were both wounded. Company Sergeant-Major Hall then made a second most gallant attempt, and was in the act of lifting up the wounded man to bring him in when he fell mortally wounded in the head.
London Gazette, 23rd June, 1915.
William Dowling VC (1825 – 17 February 1887), Born in Thomastown,  Dowling was approximately 32 years old and a private in the 32nd Regiment of Foot (later the Duke of Cornwall's Light Infantry), British Army during the Indian Mutiny when he was awarded the VC for the following deeds:For distinguished gallantry on the 4th of July, 1857, in going out with two other men, since dead, and spiking two of the Enemy's guns. He killed a Soubadar of the Enemy by one of the guns. Also, for distinguished gallantry on the 9th of the same month, in going out again with three men, since dead, to spike one of the Enemy's guns. He had to retire, the spike being too small, but was exposed to the same danger. Also, for distinguished bravery, on the 27th of September, 1857, in spiking an 18-pounder gun during a Sortie, he being at the same time under a most heavy fire from the Enemy. He was later promoted to sergeant and died at Liverpool, 17 February 1887. His Victoria Cross is displayed at the Duke of Cornwall's Light Infantry Museum in Bodmin, Cornwall.http://www.dowlingfamily.info/zOLD/i1857in1.htm