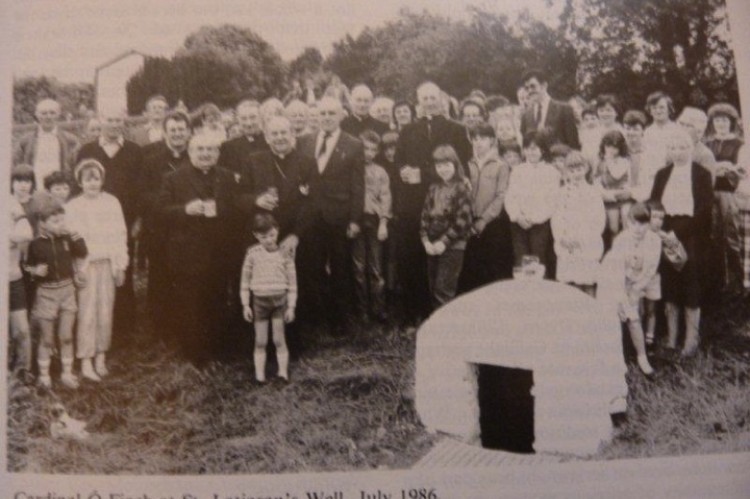 People used to walk around the graveyard saying the rosary and they used to finish up at Dan Sullivan’s grave. At the back of this grave there was a stone and the people would draw a cross on  this stone which in time showed a cross etched in the stone. The story is told that when Dan Sullivan’s son Mick Sullivan  of Knocknageeha  died about 20 years ago when a grave was being dug that there was a wall at the side of the grave and there appeared to be a holy water font on the wall and that would indicate that this was the wall of the old church and so the round on St Laterianday ended at the corner of the church.

The old church in Cullen dedicated to Saint James was built in 1847 by Fr Fitzpatrick the then Parish Priest of Millstreet  Co. Cork replacing a thatched church within the graveyard that was burned by Cromwells Soldiers a long time ago.  Fr Fitzpatrick’s church had a mud floor and a slate roof.

This Church served the people of Cullen up to 1907 when the Parish Priest of Millstreet and future Bishop of Kerry Canon O’Sullivan decided that it was time to modernise so he built a new Church at a cost of £3,000 probably a huge amount of money at that time. The old church was then used as a Community Hall for hosting Concerts, Dances and Feiseanna.

The Clerk of the church at the end of the last century was a man named John Evans and his wife was known as Mag the Clerk. They lived in a thatched house where the Grotto now stands.

There is a tradition that a priest was buried near the old thatched church and people paid rounds to his grave on Laterian Day making the sign of the cross with a pebble on his gravestone. In the late 1950’s early 1960’s a Mr Forde was digging a grave on this very spot when he discovered coins, rosary beads and other items

See attached photograph’s of old church taken in the 1920’s. A slab on the ha

The wall around the graveyard was built by a man by the name of Dan O’Connorof Knockduffin the 1880’s He was an Irish poet and he died in 1930 .This man told the story that he used the stones of the old monastery to build these walls. Therefore this is a new wall and it might be interesting to go around and examine the wall closely to check if there are any markings or carvings on them.

Dermot Kiely also told us of the lady from the village who used to gather the remnants of coffins to keep her fire going but then again times were very poor .

Tom Hickey relates a story of a slab which is lying up against the entrance wall to old Cullen Graveyard for a long time. Tom tells of being told by an old man one time that this stone was brought in a horse and cart from Brosna in County Kerry over 80 years ago and the gentlemen that brought it went to a local pub for a drink and stayed there for the rest of the day and they never returned again. Apparently there are fine inscriptions on it and hopefully it will be read in time.

Timmy Joe Sullivan related a story going back to 1943 when he was only 6 years old when his grandmother died in Shanballajust outside Knocknagreevillage and her remains were brought from her home in a horse hearse and buried in the old graveyard in Cullen.

Denis O’Mahony tells that a Mr Connie O’Sullivan of Meenagloheranemade concrete headstones very similar to those made by stone carvers.