An interview with Terence Dunne at Moybologue graveyard, Co. Cavan. 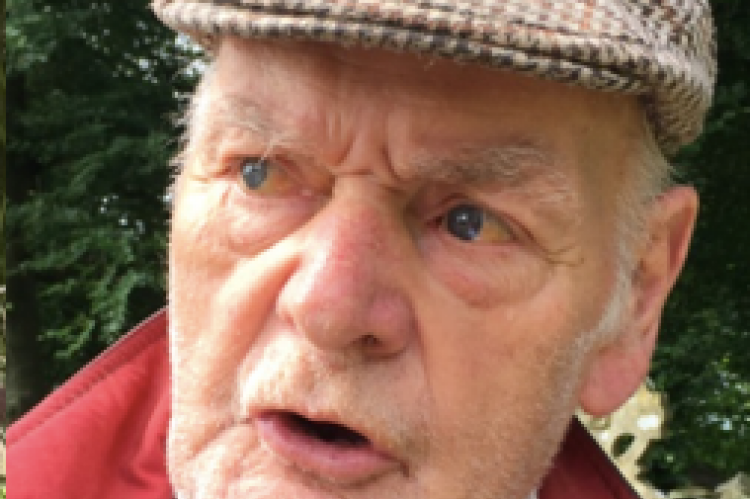 Terence Dunne visited us during survey work in Old Moybologue and while chatting he touched on his Clarke relatives who made their own headstone, his father's generation who were orphaned young with 11 siblings and how they overcame adversity by dint of being united. Premonition of death was experienced regardless of distance and long term illness with TB was countered by cooperation between family farms.

And now it's recording. Okay, so we're standing under the beech trees in Moybologue graveyard and I'm standing here with? what's your name please?

You  live around here. Do you?

Yes, I do live in Bailieborough

Bailieborough Yes. And we're standing at a headstone here. She has number 32 on her or but this is one a ye're family headstones.

That's right it'd be on my mother's side of the family,

They were Clarke's from Fartadreen.

And you were saying your uncle told you the story of the stone.

My granduncle actually. Yes, he was my grand uncle. And he told me about this stone that they actually made this stone at home in their own yard. Him and some other brothers and they made the stone and did there best with the names as you can probably see the spelling of the Clarke, goes to another line. drops down to another line.

But this is a fine job.

Yeah, I would I think it's a magnificent job.

Yeah. For the first one they ever done

Roundheaded with two flat shoulders and she has a bit of a hood on her.

The round is a little bit off but the lettering is very good.

Well I wouldn't understand that.

Unless they got somebody but it'd still would be somebody local?

That time there wouldn't be traveling.

Any  distance . It's like the cooper's and everything else. There was one for everything in the audience a person who could do something. Everything. There's always someone in the locality. Yeah. But they did most of it themselves. Were they farming? They were they lived on a small farm over in Fartadreen. Milking maybe a cow. Which would be I remember this, the man that told me this was I was called after him Terence Clarke.

He  left school when he was 1, had to and went out working for six pence a week. To help

to feed the ones at home. Yeah. And he ended up a fluent Irish speaker,  he taught one am not goin' to give the man's name the man came to this town here and he ended up a headmaster in the town . And he was from the north. He had an a word of Irish  and inside of 12 months He was a fluent Irish speaker with a fainne from Terence Clarke. And my sister did all her exams through the medium of Irish through secondary school and all on a ma that left school at 10.

But did he grow up speaking Irish speaker?

my sister was always commended. She came second, I think in in Ireland and here Leaving. And it was all done through the medium of Irish. And that was unusual, that that would be back in the 50s. Okay. 1950, early or late, early 50s. Yeah. And there wasn't very many people, people fit to speak Irish at that particular time.

You were saying Terence, you’re a Dunne and also that there's Dunne graves in this graveyard. And Dunne headstones. That's correct.

Yes the other side of my family is back over on the other side on the opposite side of the graveyard. Which actually, we're very proud of now. That we're all in the one, in the one graveyard. Even though my mother, my parents are not here and that this is still this is the one that I always frequent.

Now you were saying the Dunne's went to America ?

Yes, there was three sons. This is I don't know how to this Pat went to America. He was a member of the old IRA. Okay. And he was shot beyond at Kilkerry right outside of Carrig. And he went under a tarpaulin to Cork with two bullets in him  and, Pat Dunne, and was carried on to his ship. And they took the bullets out of him on the ship.

Wasn't he tough? I don't know where they were in him now but they were there anyway. And he went to American then he brought out his two brothers. He was a perfect gentleman I met I had the pleasure of meeting him.

You were a boy.

Yeah, I was very small. But he was. He was very like my father.

Phillip Dunne and saw Philip on a headstone,

That would have been his father. And the mother died at 39 the name with 11 in the house. And they all, if we go from the monetary end of they all ended up, very successful. They went forward. From a very humble start. And I mean a humble start.

What was the secret was, how did that happen?

United, I would say unity. Inside of the family, and it never left it. There was an aunt of mine down in Kildare. Down in Athy down, supposedly to be in where we originally come from, that area. My uncle who, as I already told the one that won a medal with Kildare all Ireland in 193? 35 or 37. I won't be? Football? Yes.

He was known as Barney, In Athy

and they bet Cavan in the final?

he had this All Ireland medal anyway.

She never forgot the next generation. We were at school down there,. In Ballyfin,

Which would be near enough Athy.

But once you left home in September, that was bye-bye until Christmas. You never seen your parents? No cars. And

we whenever you'd run hunger,

Hunger would get the better of ya. You're write to Aunt Lizzie. And by return post, this huge parcel and it was always distributed around. They all had different behaviors and everything and it was all distributors round except from the few odds and ends wasn't. But she she would have kept us built up with growth she was a wonderful person.

She was more, she was a matriarch or something like that should call. Yeah, actually, she never missed Christmas Day, but the day close on Christmas Day. They always landed to Bailieborough for Christmas Day. And the parcels in the boot.

There's a big drop off. She don't

Well that's what I would put it down to. It's interesting.

And the ones that went to America were still as close to home as if they were there.

I'll tell you an interesting thing. It wasn't funny. It was quite frightening actually. My father was lying across a gate. This is absolutely true now.

is lying across a gate outside the back door of our house.

Looking in next to town. And

he come into the house and this is my mother's name was Sheila she was Julia. He says you know Sheila something terrible is after happening in America.

a not at all Phil you're imagining things.

I don't know there's something terrible after how in that time, it was telegram, the next morning and the telegram landed that his brother Pat had died the day before

wasn't that someone Yeah, that will show you how close they were.

This is what I always maintain about it. Do you know like that?

That the way whatever. I could never explain it anyway

and wouldn;t try. That's when I say about a united family. They were as close. And I had an uncle very ill for years. From the tuberculosis era. And would have spent a lot of time in a sanatorium. It was just the same as he was at home.

My father. His farm's work was always done first. By my father. Then he did his own. Potatoes went in first for uncle Andy. Ours went in next. The hay was made first. You know, that's, it shows you how. And and it was all done quietly. The only reason we knew we'd be helping in some way or another, you know, they were closer than we were, are now, and I'm reluctant to say that. You know, because they were closer. I think they were. And even though there was they were all and all knew all about each other.. You didn't have to go looking for information. They had it.

That's about it. Okay, brilliant Terence. Thanks a million!