The Fuadach and Swearing an Oath on a Skull in Kildownet 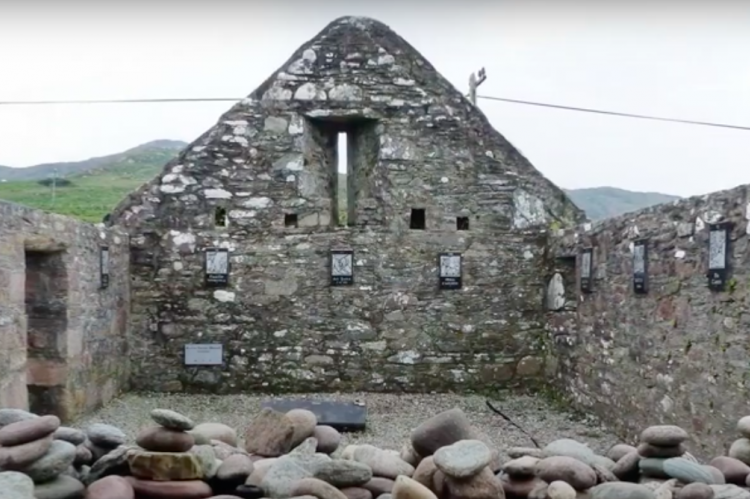 Marriages in Ireland from the 16th century up to the 20th were certainly a lot different from those today. A custom known as ‘Fuadach na mBan' meaning abduction of young women was a noted occurrence within the context of the history of marriage in Ireland, even in Kildownet.  The fuadach can be described as the practice of carrying off a woman with the purpose of compelling her to marry a man who would then have access to her dowry of land or money. This form of abduction was often a crime of considerable terror and violence and was usually done without consent. It might now be viewed as an extreme route to marriage and was primarily performed by men hoping that after abducting their daughter, the young woman's family would then be compelled to agree to their marriage when their daughter's reputation may have been damaged.
Notwithstanding that, it must also be noted that sometimes these abductions occurred when a young couple wished to marry against their parents' wishes. No doubt this marriage strategy reflects the desire at the time of families for property, attitudes to marriage, and the value of women in Irish society in general. From folklore, and oral history in this area there was a story of a fuadach where a girl was abducted and brought to a remote house in Ceathrú Garbh, a townland west of Cloughmore. On entering the house the young girl was asked by the father of the abductor 'did you come here willingly or without your own consent?' When she confirmed that she had not come willingly and that she was abducted without  consent, the father assured her that her honour would be preserved. He then banished his son to the upper room, stood guard all night and the next day the girl was returned safely to her parents' house.
In Maxwell's Wild Sports of the West, a lady was brought during a fuadach from Achill to Ballycroy, led and later found safe and well at a prinkum (a wild drunken party) there. According to another story, a girl's honour was brought into disrepute after a local fuadach, and this led to a faction fight outside the church in Kildownet. In typical fashion, this faction fight  involved a mass brawl using all kinds of weapons including pitch forks, sticks and stones where reportedly, women carried stones in their aprons for men to hurl at one another. The use of stick fighting was also associated with faction fights and often the sticks were weighted at one end to cause maximum injury. Faction fights were rarely disciplined affairs and initial taunting could quickly escalate to all out murder. On this particular occasion in Kildownet, oral history tells us that the road 'ran red with blood' from the day's atrocities, and that 'a sock was used to quell the blood loss' from the skull of one poor unfortunate man.
Many villages had their own groups of fighters, and one such battle involved a man of the surname Kilbane. His fight was arranged for one  particular Sunday after mass, and his opponents had enlisted the help of a 'pugilist' from Currane. On the designated day, the Currane man (? Joyce) met with Kilbane but refused to fight him stating 'he had no quarrels with this decent and honorable man' and so this bloody battle never took place.
The response of the local authorities at this time was to observe rather than to intervene, and indeed the many local disputes like this one were often settled through brawls outside the local church in Kildownet after mass on Sundays. Fr Michael Gallagher who was the parish priest in the area at the time later relocated the church to its present site in Derreens from Kildownet, so ferocious were the Sunday afternoon sessions. Courts were not used to settle any form of dispute, and little heed was paid by the local people to the English laws and so they preferred to settle matters through their own resources.
In Ireland, to swear an oath on a skull or "Mionnaim ar chloigeann an duine' was especially binding if it was used to clear a man of an accusation. On the other hand, to swear to a lie on a skull was to  risk sudden death, or some form of terrible consequence. In fact, swearing on the skull was even more binding than swearing on the bible (in number 3 position), or on the priest's vestments (number 2). in Ireland at that time, many saint's tombs had openings in the form of windows or holes so that the skull and/or bones were visible, even within arm's reach. This provided direct access, and facilitated the practice of oath swearing, but additionally, it was said to heighten the relationship between the pilgrim and the saint who sought refuge in prayer to the given saint. It is noteworthy that in the big clean up that was done in the old graveyard in Kildownet in the 1980s, a skull was found in a recess in the western wall of the church, little doubt that customs involving skulls were also used in our locality.
From oral history, many will remember this skull which was later interre d in the ground beneath by the late Fr Jackie Conroy, who was officiating at another funeral at the time. The identity of the skull remains to this day unknown, and this and many other of our local customs will never cease to amaze us.