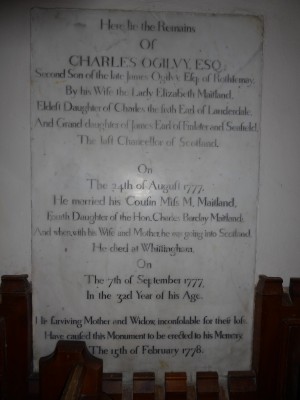 Here lie the remains
of
Charles Ogilvy, Esq
second son of the late James Ogilvy, Esq of Rothiemay,
by his wife the Lady Elizabeth Maitland,
eldest daughter of Charles the sixth Earl of Lauderdale,
and grand-daughter of James Earl of Finlater and Seafield,
the last Chancellor of Scotland.

On
the 24th of August 1777,
He married cousin Miss M. Maitland,
fourth daughter of the Hon. Charles Barclay Maitland.
And when, with his wife and mother, he was going into Scotland,
he died at Whittingham,
on
the 7th of September 1777,
in the 32nd year of his age.

His surviving mother and widow, inconsolable for their loss
have caused this monument to be erected to his memory,
the 15th of February 1778.

His death was recorded in the Newcastle Courant on 13th September 1777:

'Sunday, at Whittingham, Charles Ogilvie, Esq; on his return home from a visit to the Duke of Northumberland, at Alnwick Castle'