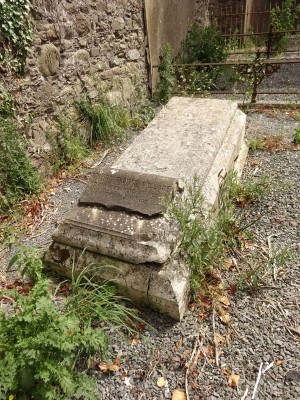 Stuart Thomas Wallace was born in 1826, according to Indian marriage records, but if the dates on his chest tomb are correct, it would suggest a birth year of 1824. The Magourney Burial Register refers to the burial of Stewart Wallace of Hayfield on 9 May 1870 aged 46 years.

He was presumably a government official in India, as suggested by the reference to Simla (in modern times known as ‘Shimla’, and situated in the northern Indian state of Himachal Pradesh). On 3 July 1852 Wallace was married to Anne Maria Ridgway in Simla, and they had 3 known children: son William Vincent born 26 June 1863 in Simla; son Herbert Stuart Thomas Talbot born 24 July 1865 in Simla; and daughter Annie Mabel Wallace born 25 July 1867 in Clonmoyle, Cork.

Wallace died on 6 May 1870, formerly being of Simla, India and lately of locally situated Hayfield House. Letters of administration issued to his widow Anne Marie Wallace, widow, with personal effects amounting to £730.

A Notice appeared in the Cork Constitution dated 10 January 1877, stating that Mrs Wallace was leaving for India, and had instructed W. Marsh & Son Auctioneers to sell at Hayfield on 12 February 1877, by unreserved auction, the household furniture, cattle, horse, carriage, harness, etc.