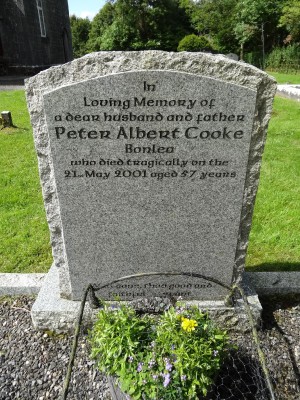 Albert Cooke - a friend to all

It is usual when Ecclesiastes 3 is read on occasions like this to stop at verse 8, but today we listened to the next number of verses because they include, “…every man should eat and drink, and enjoy his work; it is the gift of God.” And didn’t Albert enjoy his work. On retiring from farming last year, he had found a new career with Cecil Melbourne. This passage of scripture was chosen because it was the piece marked in his Bible as that which he had last read.

Albert’s day always included the reading of his Bible, the practice of a lifetime. Nobody knows how often he read his Bible through but no day passed, no bedtime came without him sitting down and reading to his family or to himself. His was a deep faith and belief in God’s goodness and in his Saviour. Sunday worship was also an integral part of his life.

He was the perfect parishioner. He always knew when he could go ahead on his own initiative or when he needed to get permission to do a job. When there was a need that required money, his answer to the problem was to hold a whist drive. And today, the condition of this church and of the rectory owes much to those same whist drives. After each of these fundraising events, Albert would appear on the Rectory doorstep next morning with a bag of money in his large hands and it would be counted and bagged. We will all remember the shout and the slap of his hand when he won or, more particularly when he won thirteen tricks. Nor only did he organise them, he also ensured that those without transport had it.

He served his Church faithfully – sitting on the Select Vestry, as Churchwarden on various occasions and when there was a work-party he was always there. He was also treasurer of the table tennis club, presenting meticulous accounts every Easter which had to be checked and duly signed by me. And we will remember the stamp of the foot as he battled it out with an opponent.

He was fully involved in the local community – in Community Alert and in any other way he could help. Albert Peter Cooke was born the youngest in a family of five – three boys and two girls. He did not plan to farm or remain at Bonlea. Circumstances beyond his control ensured that he remained and in time inherited the farm to which he brought his wife June and reared his own family.

Our second reading was chosen because of Albert’s fanatical love and following of the blue and gold. On Sundays when there was a match, Albert would appear at the early Service. Nothing could prevent him from worshipping God on Sunday. Our second reading John 3 was chosen by his family because it includes the verse he saw displayed at every match – “John3:17” – “God so loved the world that He gave His only Son that all who believe in Him should not perish but have everlasting life.” All this he firmly believed.

We cannot estimate the loss Albert is to us, but the greatest loss is to his family whom he loved so dearly. June, Peter, Gillian, Nigel and Hazel he loved you and was so proud of you. He was so proud when June volunteered to play in Church and last Sunday he sang with such enthusiasm while June played. Peter he was so pleased that Lorna and you were to be married. He more than approved of Gillian’s choice of Nigel and he was so proud of Nigel and Hazel’s progress towards their careers. He was also so proud and happy when his cousin’s husband, Paul, became Archbishop.

We have come here to support and comfort June and her family and they will need our continuing prayers and support in the days to come. To you June, Peter, Gillian, Nigel and Hazel, to his brothers, Henry and Tom and to his sister Elizabeth and to all his family and friends we offer our heartfelt sympathy. And for Albert we pray that he may rest in peace.

When we think of one who has passed away
Fond memories we recall,
Of the greatest friend a man could have
Who was known and loved by all.
A man of great ability, who was stalwart, staunch and strong,
A man of truth and honesty, who knew not how to do a wrong.
At his graveside in Kilcooley, one need only stand and look
To see people there in hundreds, all respected Albert Cooke.
Although he is gone, still people come, those visits yet don’t cease,
They gaze in sorrow at the spot where He now Rests in Peace.