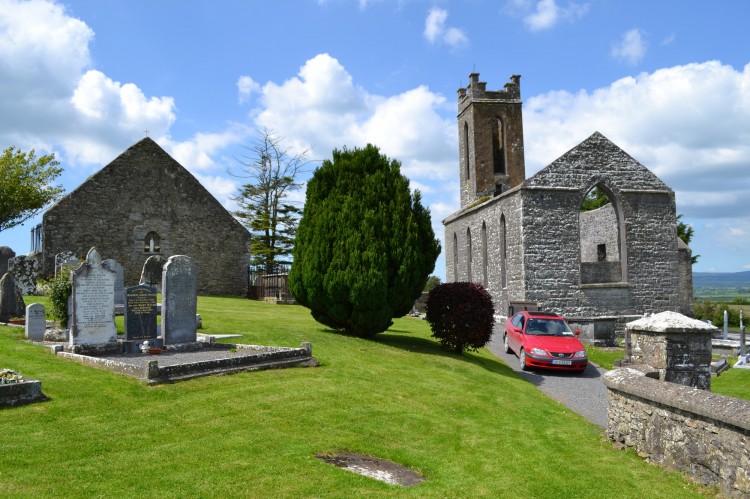 The graveyard is in rural area, surrounded by pasture and crop fields. The ruins of medieval church, marked on 1841 OS map as 'Church (in ruins)' . The graveyard is located c. 100m north of the 'Moat of Skirke', a prehistoric henge monument adapted as a medieval motte. Graveyard has irregular shape. Boundary stone wall intact, 63m north to south, 46m east to west and c.1-2m high, with a gate and stile in the east wall. A path leads from the gate to the church ruins; Access from roadside via a gate and stile. Ground level higher within than without. Grass regularly mown, ground maintained.

Graveyard contains ruins of two churches, a medieval church and an adjacent Church of Ireland church. The medieval church was dedicated to Blessed Virgin and collapsed in 1835 leaving only the east gable and part of the south wall. A later vault or crypt, possibly 19th century in date, was built into the internal side of the east gable. The Church of Ireland church, built c. 1750, is derelict and roofless. A tower is located at the western end. The interior of the church is no longer accessible.

The graveyard contains 18th to 20th century headstones, celtic-style crosses, recumbent slabs, low coped tombs, a pedestal tomb and chest tombs; nearly all are upright and in good condition, with just a few are leaning or collapsed. The earliest memorial dates to 1772 while the lates dates to 2006. A number of small uninscribed markers within graveyard. Some human bone noted on ground surface near the crypt attached to east gable of medieval church ruins. There appears to be at least one early cross marker west of the Medival church.