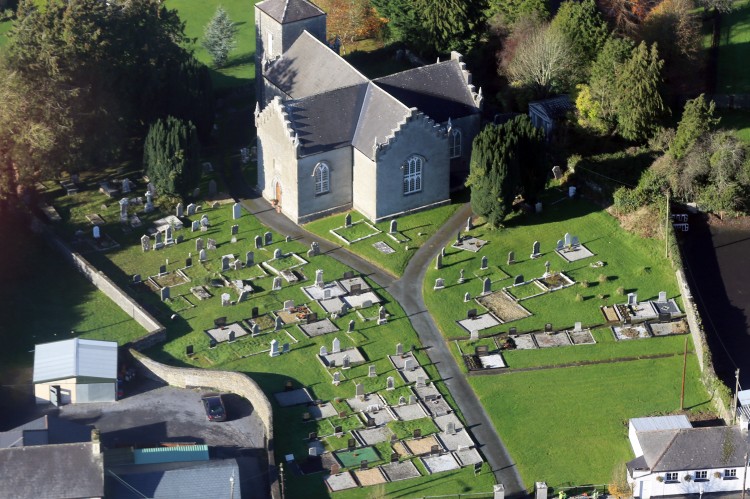 St. Paul’s Heritage church and graveyard are situated on the Main Street of Newtownforbes village, Co.Longford.
The present church, of cruciform plan was built by John Hargraves in 1820 and has unusual crow-stepped parapets being vaguely Scots Baronial in style and replaced an earlier church on the site, built by the Forbes family of Castleforbes c.1694.

The large irregular shaped graveyard (LF008-035001) surrounds the church and has been in   use since the late 17th century. The 1st Earl of Granard died in 1696 and is interred in the vault beneath the church, while the oldest known headstone (LF-008-035002) is dated 1st April 1698. Two hundred and ninety five memorials have been recorded for this project - headstones ancient and modern, chest tombs, table tombs, ledger slabs, Neo-Classical monuments, internal church memorials and a Mausoleum (1330-3022) where Beatrice, Countess of Granard (1883-1972) is interred. The script, ornamentation and memorials are a tribute to the skills of our sculptors and craftsmen.

Training for the survey was provided courtesy of Roscommon County Council as part of Roscommon graveyard project. The survey was carried out as a Church and Tidy Towns project by local volunteers under the guidance of Niamh Hanlon, Historic Graveyard Survey and Recording Project Manager [RCC].  The uploading of the material was financed by Longford County Council and supported by Longford Historical Society.
The editors of the site are Doreen McHugh and Des Mooney.