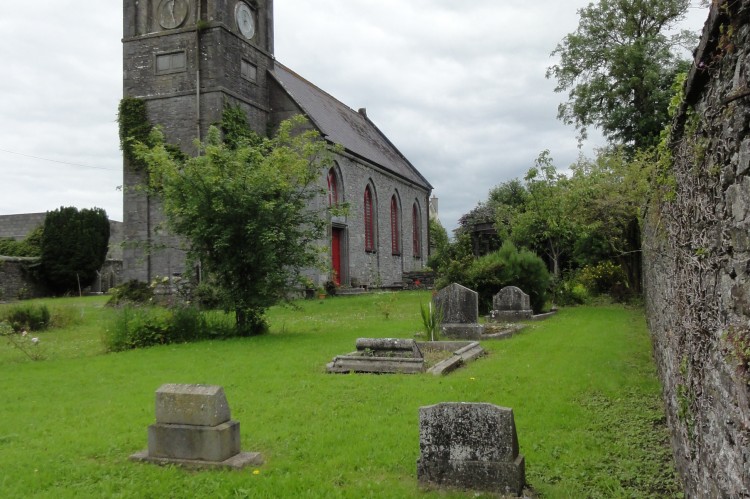 Sir Robert Langrishe granted the site for the Church on the 25th October 1828. It was part of the lands of White’s Castle. Its measurements at the time was one rood and 26 perches. The Church was built by a loan from the Board of First Fruits, at a cost of £1,107 and 13 shillings and 10 and a quarter pence. It was consecrated on the 7th November 1829. It was accidentally burned and rebuilt in 1912. The Architect was J F Fuller.
Prior to the building of Knocktopher Church in 1828 the Old Abbey Church of Knocktopher which is opposite the Carmelite Church now in ruin, was used by the Church of Ireland for Protestant worship from the Reformation until 1828. The Church was dedicated to St David. The Parish of Knocktopher was added to St Peters Ennisnag in 1942.

The earliest memorial in this Protestant graveyard dates from 1837. All memorials face East except number's 14, 15, and 16 which face West. The probable builder of the Church was the Rev. Hans Hamilton, Rector of the Union of Knocktopher. The Rev Hamilton, who fled Knocktopher with his wife, after the tithe war and the Battle of Carrickshock on December 14th 1831, is not buried here. He was born in Armagh 22nd May 1776, the son of the Rev Hugh Hamilton of Newtown Hamilton, county Armagh, sometime Dean of Armagh and later Bishop of Ossory (1798-1805). Hans Hamilton married Susanna, the 5th and youngest daughter of the Right Hon. Silver Oliver MP, of Castle Oliver, county Limerick. They do not appear to have had any children. He died in Leamington, Warwickshire, England on 8th February 1839 (Prerogative Will proved in London on 9th March 1839). His widow death announcement was in the Limerick Chronicle of 6th June 1857 and took place at the home of her nephew, Parlington Hall, in Yorkshire, England ( Prerogative Will proved in London 25th January 1857). Memorials of the Langrishe family, of Knocktopher Abbey, are well represented but for completeness we have included the Langrishe memorials in the older graveyard at Knocktopher; these have been added separately at the end of this article. It is interesting that for two Langrishe infants the causes of death are given, notably scarlatina and croup; normally the exact cause for infant deaths is not given on headstones. Although it is assumed that most of the burials in this graveyard are of Church of Ireland denomination, this is not always the case. Headstone no 36 to “Dear little Nelly Shivas” who died in 1899 aged 2 yrs, is highly likely to have been erected by James Shivas, a Presbyterian gardener/ domestic servant, originally from Scotland, who was living at Floodhall with his young family (National Archives of Ireland 1901 Census). The church is now de-consecrated; for the past 16 years it has been the Irish home of Bruno and Jacqueline Tosi. We would like to thank Bruno and Jacqueline for their enthusiastic help and interest in this project and for their original map of the headstones in the graveyard. The graveyard is well maintained both by the Tosi family and FAS and remains a public graveyard.

The Church of Ireland now de-consecrated, is the home of Bruno and Jacqueline Tosi.