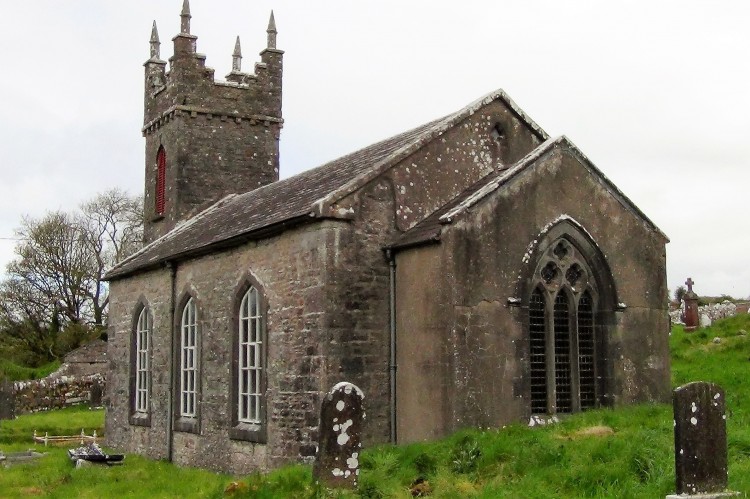 Surveyed in 2017 as part of the Sligo Historic Graveyards Project.  Funded by Sligo County Council in partnership with The Heritage Council as an action of the County Sligo Heritage Plan 2016-2020. See www.sligococo.ie/heritage for more information

Kilmactranny Graveyard is in the townland of Carrickard, in east Sligo and named after the old parish of the same name.  It is about three miles west of Ballyfarnon and seven miles north west of Boyle. The site is mentioned in the Annals of Lough Ce in 1236 and is recorded in the Taxation List of 1306 as "Church was waste".

St Thomas' Church of Ireland (NIAH Reg. No. 32404101) is on its southern boundary. Built in 1811, on the site of an older church founded by St. Macatrany (SL041-038001-). It has an interesting historical connection, from 1852 to 1867 the Rector was Rev. Arthur Hyde, father of Douglas Hyde, the first president of Ireland. The family lived in the adjacent Glebe.

A Conmee family vault, testimony to the presence of a late medieval Irish poet and annalist, is situated at the back of the church. Dr. O’Rourke’s 1880 study “Ballisodare and Kilvarnet” mentions that a famous duellist, Centy O’Rourke is buried near the same vault. “Killed in a duel near Achonry in 1779, buried in Banada and later re-interred under the cover of darkness, in the graveyard at Kilmactranny”.

In the field to the north of the graveyard is a large boulder bearing a cross which dates to 1680. It once bore the inscription (no longer visible) “Pray for the soul of Emund et Owen McDermot roe….1680.” A similar stone, within the graveyard bears the same name and is dated 1682.

An old laneway to the north is called "Barr na Marbh" referring to the great famine when the women of the area brought the bodies to the top of the hill. The men working on the road collected the bodies and buried them in the graveyard. This story was narrated by local historian Murtagh Corcoran RIP, who lived nearby and is now resting in Kilmactranny.

The graveyard is maintained by a voluntary committee funded by donations collected at the annual cemetary mass. Donations can also be given to any committee member or paid directly into the following bank account: Bank of Ireland, Sligo. BIC: BOFIIE2D IBAN: IE71BOFI90544041226102. All donations are gratefully accepted.