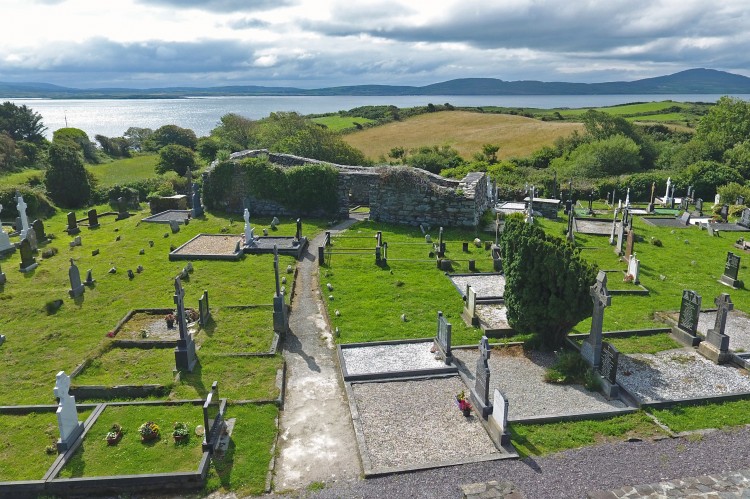 The legend of his arrival to the Sheep's Head peninsula is shared with the people of Kerry. It is said he was banished by local tribes for his Christian beliefs and given a fatal punishment: he was set adrift at sea on a coracle, a one man hide covered craft not fit for the ocean.
He drifted across two bays and miraculously washed ashore south of this cemetery. He founded a religious settlement at this site and since then it has been a place of worship and burial. In the 1300's the church was established and it has been known since then as the Cill of Crochan, now in ruins.
Local folklore describes damage to the building by Elizabethan troops under Carew, during their western campaign to subdue O'Sullivan Beare (1602). It is said that the building was completely restored by local people the very next day.
The church was still in use in 1615 but by 1639 it is described as in ruins (Brady 1863,vol. 1 92-3). A chamfered arch-stone from the original is in use as a grave marker to the south of the church. A souterrain was discovered in the course of grave digging to the south west of the church, but is now filled in and used as grave sites (Arch.Inv. of Co. Cork Vol. 5).
The first church in Kilcrohane village was built in 1820 on the site of the current primary school. The present Church of Mary, Star of the Sea was built in 1897 (O'Mahoney 2000).