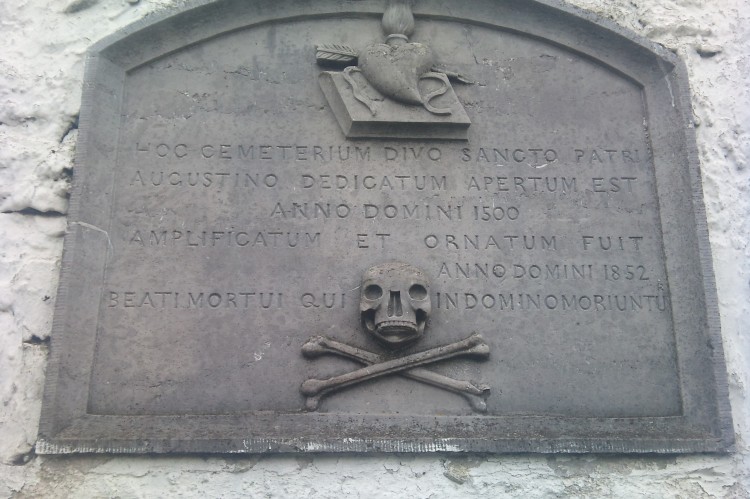 The graveyard at Forthill occupies the site of the late medieval Augustinian foundation which was demolished in the 17th century.  A star-shaped fort was built on the site and elements of its shape are still traceable in boundary walls and ditched areas at the site.  The entrance gateway, which dates to the mid nineteenth century faces onto Lough Atalia Road. There is a mortuary chapel inside the entrance gate which bears a plaque inscribed in Latin commemorating the dedication of the site to St Augustine in 1500. There are two modern monuments to soldiers and sailors of the Spanish Armada killed there in the 16th century (GA-FTHL-0603 & GA-FTHL-0937).

The graveyard contains a fine range of monuments dating mainly from the 18th to 20th centuries and ranging from plain ledges to plain concrete crosses and from Classical Revival monuments to Celtic Revival crosses.  The oldest recumbent slab in the graveyard commemorates Mary Martin, daughter of Andrew Martin and wife to Ignatius Kirwan, who died in 1736 (GA-FTHL-0579). There are a group of west-facing recumbent slabs close to the northern wall of the graveyard which are marked at the base with a small cross and St. A. including a group of Augustinian priests and nuns (GA-FTHL-0583-0589), Dominick & Julian Lynch dated to 1757 (GA-FTHL-0524), Mary Martin dated to 1736 (GA-FTHl-0579) and George and Margaret Staunton dated 1781 (GA-FTHL-0525). There are a fair number of monuments with vocational symbolism which include a set of blacksmith’s tools (GA-FTHL-0203), a farmer’s plough (GA-FTHL-0623), a mason’s trowl (GA-FTHL-0705) and a weaver’s shears and shuttle (GA-FTHL-0225) and some wonderful examples of 18th and 19th century lettering.  The cemetery has been lovingly maintained by  several generations of the McDonagh family and is the property of the Augustinian order.