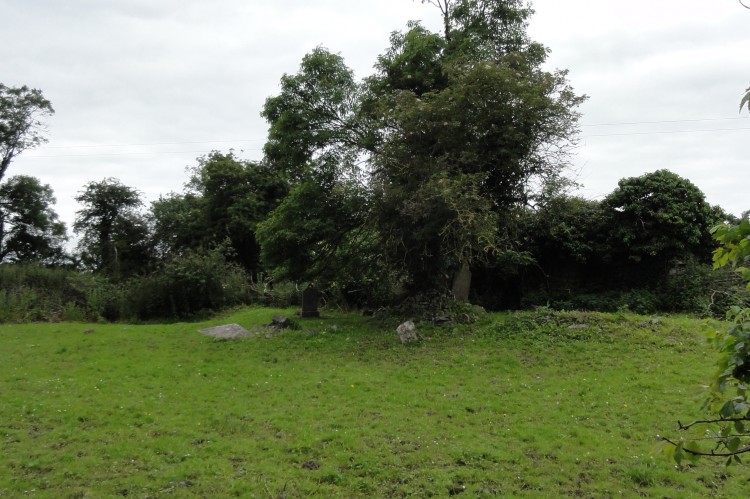 The name Danganmore may have been taken to signify the big fort or fastness. It’s local interpretation however is “the great fence” /cly being it’s Irish word use in this part of the country to signify an ordinary fence or ditch and daingean to signify a large strong fence such as may often be seen separating one ancient townland or parish from another.

Danganmore lies to the south west of Kilkenny city. It is in the Parish of Dunnamaggin. Dunnamaggin consists of 15,752 acres in area and has a population of approx 1,300 people. It stretches from Kells village to the north of Kilmoganny village in the south. Dunnamaggin is in the centre of the Parish. The Parish includes the medieval parishes of Dunnamaggin, Danganmore, Ballytobin Kells, Kilree and Kilmoganny. There are a significant number of archaeological remains and monuments in the parish. The old church of Danganmore “Teampall a Daingin” is now a complete ruin presenting but the mere stumps of the walls and little more. It became one of the possessions of the Priory of Kells at a very early date. On the roadside north of the older Church and graveyard stood a later church said to have been erected by the staunchly Catholic families of Comerford or Ryan sometime before the year 1731. The inscription on a chalice now known as a Danganmore Chalice reads as follows:
“This Chalice was made up by the Parishioners of Danganmore and by the Revd. Thomas Cranisbro”. The remains of the old church are now all but obliterated but it was described by Canon Carrigan in 1905 as having traces of two small windows and a fireplace. The Pastor must have resided there as was common at that period “The Capella de Dengilmore ". The Church of Danganmore was abandoned about the year 1790 where the Parish church was erected in Dunnamaggin. This church was dedicated to St. Leonard. It was then abandoned in 1967 and a new church built. It was officially blessed in 1972.

In Danganmore graveyard there are a few inscribed monuments; two to the Ryan family. It mentions Peter Ryan Esq. of Danganmore who died August 31st 1828 aged 79 years, his daughter Anne Ryan aged 17, his father John aged 86 and his brothers Edward and James; the former 44 and the latter 30 years of age. In the next grave, to the south, lies Peter Ryan Esq. (better known as Johnny Ryan) of Black Lane Kilkenny, a Catholic gentleman of great prominence in his day, who died very old about 1845. The Castle of Danganmore stood 150 yds south of the church yard but only a fragment of it may be seen now where the Comerford resided. The Comerfords came to Ireland approx 1170 and became Barons of Danganmore some time later. In 1552 Peter was Baron of Danganmore.

The Ryans, their descendants and successors lived not in the castle but immediately beside it in a large slated house. In 1680 Charles Fitzgerald married Catherine Comerford “Kathleen
Comwethoon “ of local tradition. After his death a short time later she married a Ryan of the Silvermines, Co. Tipperary who had lost all his possessions during the Williamite wars. By her will, dated at Danganbeg February 1738 she directed that she be buried with her ancestors in the family burial place at Kilree and bequeathed her property to her sons James and Jeremiah. The will also contained a clause which stated “I leave and bequest to my grandson John Ryan one suit of vestments with altar linen, missal, and large gilt Chalice and to remain for ever in the family and that I may be prayed for yearly”. Thus ended the Comerford family in Danganmore.

Jeremiah Ryan succeeded to Danganmore and married a Miss. Peppard in 1721. He died in Kilkenny in April 1758 but his wife lived on to the great age of 104 years. Their eldest son John joined the Irish brigade in France and fought gallantly at both Dettingin and Fontenoy before returning to Danganmore after 7 years of foreign service. His younger brother James Ryan also joined the Irish brigade and rose to the rank of General.

John Ryan married Anne Ryan of the city of Kilkenny, daughter of Timothy Ryan and Mary Knaresborough. Their son Jeremiah Ryan lived in the city of Waterford, married Miss. Margaret Bourke of the Queens. Co. and had issue. A daughter Mary Ryan, born 1795 who eventually succeeded to the Danganmore property in 1820. She married Michael Theobold Langton of the old Kilkenny family of that name and died in London January 22nd 1864. She had the following issue Henry Theobold, Francis, Mary, Margaret, Josephine, Eleanor and Eliza. Henry was captain in the Louth rifles in 1864 and he was heir and representative of the Comerford and Ryans of Danganmore and Ballintee thus ending the line of another Danganmore family.

The Danganmore memorial stones at the entrance to Danganmore “Bosheen” on the main Callan Waterford road are two moulded stones which must have originally formed a wayside cross. From the appearance of the stone blocks this seems to be true. Their actual site at the head of the old roadway leading to Danganmore castle making the assumption a certainty. The cross was entire some time previous to the year 1850 but was then removed to prevent it’s desecration about the year 1890. A diligent search was carried out to locate the missing cross but the effort proved fruitless.
The pedestal or base of the cross is 3ft high and 1ft 9 inches in length and breadth and its sides are polished like marble but have neither letters nor ornament but seems to stand on it’s original site. The upper edges are Chamfered and in the centre of the top of the stone is a squarish piercing designed to receive a tenon of a stone cross. The second stone is inscribed and said to have formed part of the original monument either resting on an independent pier or masonry or as a base for the other stone. The former position seems to be the most likely but it might be argued that a way side cross had already existed at the site when the inscribed stone was erected. The inscription is a curious one carved in raised letter of the Gothic or old English style. On two sides of the plinth the second line of the first side is continued round the corner to the right handside but the remainder of the legend appears in the conventional manner. It reads as follows:
Left side right side
ORATE PAIABs DNE RICH
COMERFORD ET JOANNAE – ST. LEDGER
RICH OBIIT 5 OCTOBS 162(4) – CATHERINA FENNELLME
JO OBIIT 3 OCTOBS 1622 – FIERI FECERT 29 APRIL
RICH COMERF JUNIOR (ETC) – AND DNI 1636

Danganmore Chalice
Very Rev Thomas Knaresborough Chalice, known as the Danganmore Chalice which has its inscription “This Chalice is made up by the parishioners of Danganmore and by the Rev Thomas Granisbro”. Very Rev Thomas Knaresborough died on 11th January 1741 and is buried in Killamery left by his last will made as his house at Coolhill near Windgap on 9th January 1740/41, that his remains to be interred in Killamery. He bequeathed to his nephew Mark (Cranisbro) to his brothers William and Kieran and sister Ellen McCarty alias Cranisbro of Carrick to the children of Mrs. Catherine Archdekin alias St. Leger and to Mary Gore his cousin and servant and them inserts the following clause – Item I leave £10 sterling to the poor inhabitants of both my stations as also my vestments and chalice to the parish of Danganmore.

Very Rev Richard Mansfield D D was ordained on 28th Mat 1768 and was PP to Dunnamaggin and Windgap on 15 November 1783. He built a new Church in Dunnamaggin in 1790 and closed Danganmore. The Church in Dunnamaggin was dedicated to St. Leonard. That church was closed in 1967 and the present Church built and officially blessed in 1972. The PP of Dunnamaggin now is Very Rev Fr. Flavin.