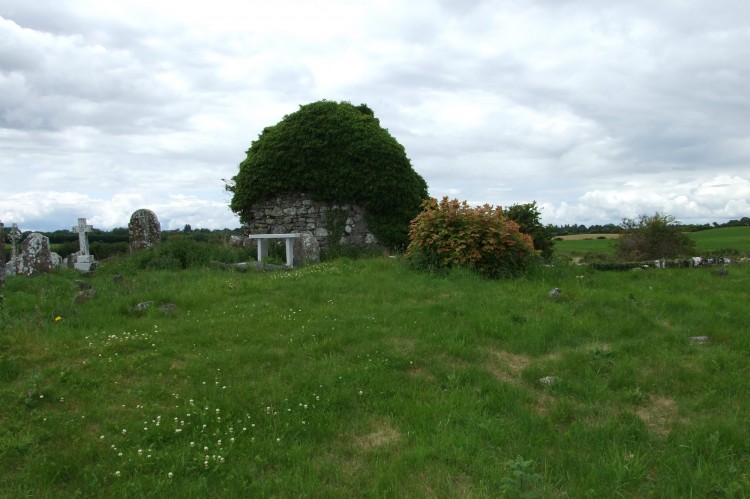 The graveyard is in rural area, on higher ground, surrounded by low-lying pasture land, on north bank of Erkina River.
Graveyard contains ruins of medieval church, marked on 1841 OS map as 'Coolkerry Church (in ruins)'. Graveyard has D-shape; boundary stone wall, 31m north to south and 33m east to west, c. 1m high. The wall is collapsing in places, and access is via a gate from across fields. No paths within the graveyard. The ground surface is higher within the graveyard than the surrounding area. Graveyard moderately maintained, grass mown fairly regularly. Site of tower-house, 'Coolkerry Castle', located c. 100m to southwest.

The graveyard contains the ruins of a rectangular church, c. 7m by 17m; with the ivy covered west gable still standing and the remaining walls covered by a grass bank. There is some evidence of collapse in the west gable.

The graveyard contains 18th to 20th century headstones, including celtic cross, round headed, recumbent slabs and table tombs; most in good condition, some are leaning, collapsed or damaged. The earliest memorial dates to 1768, while the latest dates to 1983. There are a large number of uninscribed grave markers which may date to the famine. The memorials are located on the south, north and east sides of the graveyard with the majority located in the south.