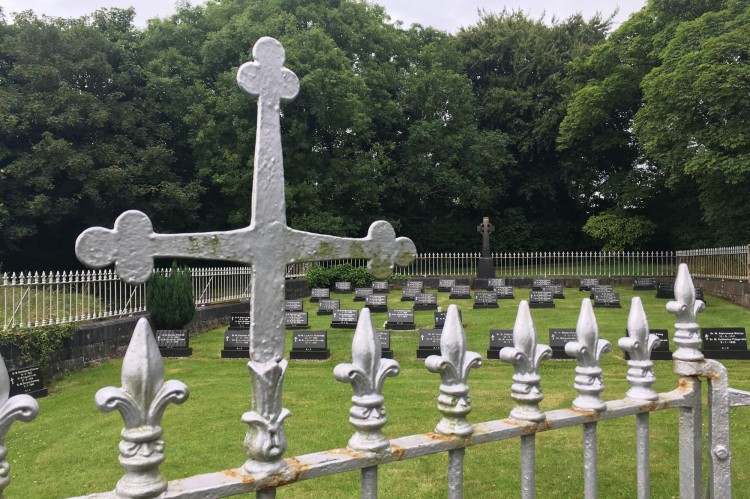 The Magdalen Home on Forster Street in Galway was run by the Sisters of Mercy. The original Magdalene Asylum located in Lombard Street was abandoned in 1870 and with the aid of a legacy was relocated to Forster Street. The laundry closed in 1984 and the building that housed the laundry was demolished in 1991.The Galway Architectural Heritage Inventory Study, undertaken in 1997, lists four remaining buildings within the site of the former Magdalen Laundry. Namely; the Magdalen Convent which was built between 1820-1840; the Chapel of Magdalen Convent built between 1950-1955; the Magdalen Home to the rear of the convent built between 1985-1995 and a burial ground built between 1860-1880. The Sisters of Mercy donated the property to the charity Cope Galway in 2013.
There are two discrete enclosed burial grounds located within the former property, one associated with the convent and the other with the laundry. The Magdalen Women are buried in the northern burial ground and Sisters of Mercy in the eastern burial ground close to the Forster Street boundary wall. The burial ground is surrounded by green lawn and pathways. There is a grotto located to the north of the burial ground and the former Convent chapel is sited to the north-west. The chapel is registered on the National Inventory of Architectural Heritage (Registration Number 30314025).
The Sisters of Mercy burial ground is surrounded by a set of railings which are set into a cut stone surround with stanchions supporting the rail from the rear. There are a total of 139 Sister’s names commemorated on 55 headstones, the oldest of the burials dates to 1900 and the most recent of the burials dates to 2016. Each of the headstones contains two or three Sister’s names. The name comprises two parts, the religious name followed by the secular surname and date of death. The Mercy cross - a cross on a cross - decorates the left-hand side of each headstone.
Dr. Jim Higgins, Heritage Officer, Galway City Council.