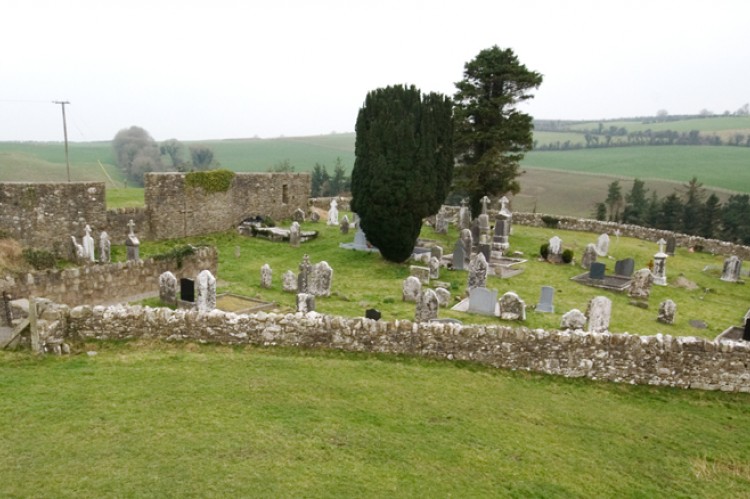 A note on the history of Castletown Church by Dr. Paul MacCotter

The de Barrys of Castle Philip (Moatquarter and Busherstown) were were one of the leading Anglo-Norman settler families in the cantred of Elyocarroll before its destruction at the hands of the O Carroll chieftains during the second quarter of the 14th century. Among a number of fees they possessed here was that of Castle Philip, a name which refers to the motte in Moatquarter. In the 1305 extent we read that Reginald de Barry held ‘one theod at Castle Philip in Ossergele’. The identification is certain: references to the church of Castle Philip occur in 1300, 1306, 1425 and 1506, and these references indicate that Castle Philip is the parish now known as Castletown Ely, whose ruined church lies in Drumroe. Note that Drumroe church lies adjacent to the motte of Moatquarter, the normal juxtaposition for manor house and manor church at this period, for in most cases parish and manor share the same shape. In this instance both church and motte bear the original name Castle Philip. In the period 1551 – 1562 the forms Ballincashlane and Ballycastelane occur in relation to the church, which comes to be known as Castletown in 1615 and, eventually, and to distinguish it from other parishes of the name, Castletownely. In 17th century records the name Castletown is also given to the townland in which the church stood, occupying the eastern third of modern Busherstown and most of Drumroe. Therefore, this church is called after a fortification built originally by one Philip (de Barry?) and which lay near the church. Yet there is no evidence from any of the topographical sources we possess dating from the mid-17th century onwards of any castle in the vicinity of this church apart from the nearby motte in Moatquarter, while the vague ‘tradition’ that a castle once stood on the site of Busherstown House can be traced to an early 19th century farrago. Hence, the inescapable conclusion we arrive at is that the ‘castle’ in question is this motte.