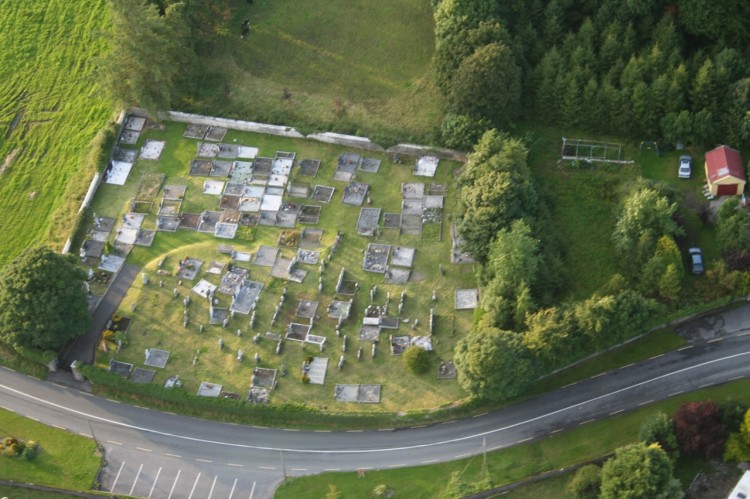 The Settlement and Architecture of Later Medieval
Slieveardagh, County Tipperary.
Richard Clutterbuck
Volume II of II
This thesis is presented in fulfilment of the regulations for the degree of M.Utt
in Archaeology, University College Dublin.

Location
Ballingarry is situated in the south centre of the study area in the hills
overlooking a tributary of the upper reaches of the Kings river approximately 1.25 km from
the modern village of Ballingarry. The site is at the cross roads between the Bohir Mor and
the road running north along the Kings River valley (Fig. 38). The land is mostly used for
grazing today. The Civil Survey identified the land quality as suitable for dual purpose,
with an emphasis on pasture (Civil Survey I, 113).
Ballingany Castle was sited at an altitude of 160 metres on ground sloping gently to the
west. The sun'ounding area appears as high ground between two small river valleys with a
sharp drop to the immediate north. Ballingarry castle had a south-westerly aspect with a
commanding position over the road.
History

Ballingarry was recorded as being in the possession of Nicholas Faninge of
Ballingarry in 1641 (Civil Survey I, 113). Faninge was part of a powerful land holding
family in the parish of Ballingarry from the medieval period to the seventeenth century. The
castle is recorded as being in good repair in 1654 with a thatch house and some cabins
associated with it. The castle and settlement at the centre of the parish is not depicted on the
Down Survey maps.
Description
Nothing remains of Ballingarry castle site except for a roughly rectangular
pile of rubble consisting offield stones measuring 24 metres by 21 metres. The castle was
destroyed to provide material for the Catholic Church in Ballingarry village in the nineteenth
centuly (personal communication with a local). The site of the castle also has a lot of mortar
but no cut stones. There is little or no evidence of a bawn, although the field in which the
castle was sited is at a higher level to the adjacent field to the south and may have originally
been an irregular enclosure.
Comment
The area of the rubble probably does not represent the original size of the
castle. The castle was probably a tower house and residence of the main land owning
family in the Parish: the Fannings.

3
Ballingarry Church
Ballingarry Td., Ballingarry Pr.
52/2
S 308496
Tl055-016
4/1997
Location
Ballingarry is situated in the centre of the study area in the hills overlooking
the upper reaches of the Kings River (Fig. 38). Ballingarry church site is in a grave yard
adjacent to the main road running through Ballingarry; an Bohir Mor (Fig. 24). The church
was sited at an altitude of 160 metres approximately 1.25km west from the modern village
of Ballingarry and 148 metres south of Ballingarry castle site.

History
Ballingany church or De Garda was valued at 10 marks in 1302/07 in the
ecclesiastical taxation (Cal. Doc. Ire. 1302-1307, 285). In 1437 Ballingarry church was
mentioned in a list of Procurations for the Diocese of Cashel and Emly when it was taxed
for 24 shillings (Seymour 1908, 331). The perpetual vicar of Ballingarry, Dermit Oconayn,
was the subject of a Papal Mandate in 1478 when he was accused of celebrating mass under
sentence of excommunication as well as leaving his parishioners to die without confession
or communion and allowing the roof and walls of his church to fall into ruins (Cal. Papal.
Regis. xiii, 606; Hennessy 1985. 69-70). By 1478 the Prior of St. Catherine the Virgin
Waterford held the rectory of Ballingarry (Hennessey 1985, 69). When the Priory was
dissolved in 1540-41 it possessed two thirds of the tithes worth £8 and one twelfth of the
vicarage of Ballingarry and Famyn Wood (Extents Ire. Mon. Possessions, 344). In 1607
Ballingarry vicarage was returned as void and destitute of incumbents (Cal. State Papers
1606-08, 241) and in the 1615 Royal Visitation of Cashe1 and Emly Ballingarry church and
chancel appeared to be standing but there was no service and the vicarage was vacant
(Murphy 1902, 290, 302). In 1640 Ballingarry had two acres of arable and pasture glebe
land on the east side of the church and fenced with a ditch, worth £5 (Civil Survey II, 399)
Description
There are no upstanding remains of the medieval Ballingany church. A
raised area in the grave yard may be the remains of a church ,however, it is impossible to
date (Fig. 34). A church depicted in the 25" 0.5. map in the grave yard is probably an
eighteenth or nineteenth century Protestant church which has subsequently been destroyed,
its stones used to build the local co-op. The grave yard contains graves from the eighteenth
century to the modem day. Bal1ingarry church appears to have been in a poor state in the
late medieval period. The church is recorded as being in ruins in 1478. By the early
seventeenth century Ballingarry church did not appear to have a resident priest though the
church is recorded as upstanding.

Comment
Ballingarry medieval church functioned as the parish church. The church
appears to have been in ruins at the end of the fifteenth century but was reconstructed,
possibly by the Fanning family who resided in the Ballingarry tower house (2) nearby.

Location
Ballingarry is situated in the south central portion of Slieveardagh, within
the Slieveardagh hills. The site of the settlement overlooks the upper reaches of the Kings
River Valley and lies approximately 1.25 km. west of the modern village of Ballingarry.
The site of Ballingmry settlement is at an altitude of approximately 160 metres, in a
sheltered position on a rise between the main road through the Slieveardagh hills called an
Bothir Mor and a deep stream valley (Fig. 26).

The castle of Ballingarry (2) was probably built by the Fannings. In 1654 Nicholas
Faninge, an Irish Papist was recorded as the proprietor of Ballingarry and the settlement at
the centre of the parish was described:

“Upon the sayd lands stands a good castle with a tatcht house & some
cabbins and a mill standing upon a little brooke neare the castle”.

(Civil Survey I, 113)
Unfortunately the Down Survey Parish map depicts no structures in the townland. The
Fannings were one of a few families to retain their land after the Cromwellian
confiscation's. In the census of c. 1659 a Jejfry Fannying Esq. is retumed as the principle
land owner of Ballingarry townland (Pender 1939,295). In 1667 Jeffry Fanning paid taxes
for three hearths, including an oven and a kiln (Laffan 1911, 135).

Description
There are no upstanding architectural remains at Ballingarry. The physical
remains consist of the tubb1e foundations of the castle or tower house (2) and 148 metres
away the church site, within a grave yard still in use today (Fig. 34). Between the castle site
and the church site are a number of earthworks, which probably represent the site of the
thatched house described in the Civil Survey (Civil Survey I, 113). The deep stream located
to the north of the settlement site provided the mill race for the mill described in the Civil
Survey (Civil Survey I, 113). The stream has slight evidence for a retaining stone wall on
channel the stream and may also have had a holding pond. The actual site of the mill is not
located. The whole settlement was located besides the main road through the Slieveardagh
hills from Kilkenny to Cashel, called an Bothir Mor. The settlement remains appear then to
be mainly confined to between the road and the deep stream.

Comment
The size of the area occupied by Ballingarry settlement was small. The
historical record and the remains on the ground show that the settlement was dominated by
the Fanning tower house (2) and other buildings owned by them. The settlement site had a
church (3) at least since the fomteenth century, probably since the initial Anglo-Nonnan
invasion and possible as a pre-Norman church site. However, by the late fifteenth century
the church was in ruins and the priest was abusing his powers. The Fannings were
associated with Ballingarry from the early sixteenth century, possibly when they built their
tower house. The choice of site was influenced by the presence of the parish church. The
settlement described in the Civil Survey appears to be a wealthy farmstead with services
and functions for a pastoralist estate. Any nucleation at the centre of the parish was
sponsored by Fanning family, either for their own use, the functions of the estate or as
houses for the workmen of the estate.