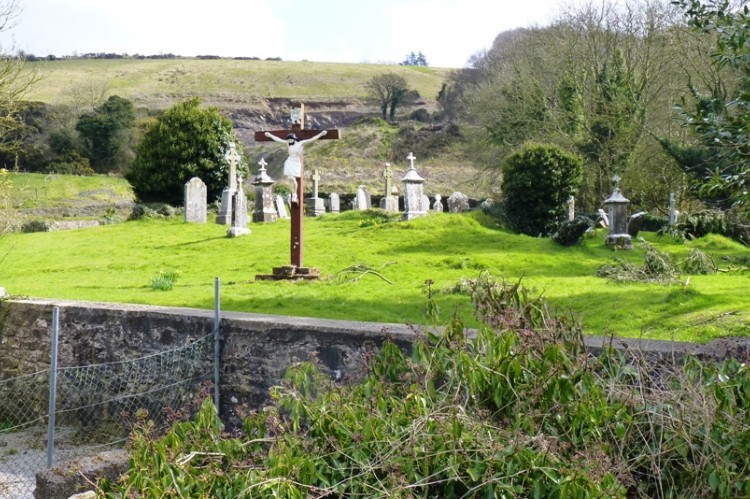 Description: On a NW-facing slope of the Slieveardagh hills with higher ground to the S and E and good views of lower ground to the NW and W. Nearby St Patrick's Well (TS048-042003-) is to the S of the church, just across a stream running along the S wall of the graveyard (TS048-042002-) (L 80m; Wth 20m). Only half of the E gable (ext. dims. L. 4m; wall T 0.8m; H 3m; int. L 2.2m), the lower wall-footings (H 0.6m) of the S wall (ext. dims. L 17m) and W gable ( ext. dims. L. 5.8m; H 1.8m) of remain of a simple rectangular church (approx. dims. ext. 7m N-S; 17m E-W) built of roughly coursed limestone rubble. Nothing visible remains of the N wall of the church. The graveyard is enclosed by a roughly coursed limestone wall (H 1.2m ; wall T 0.45m), with 18th and 19th-century headstones inside and to the S of the church, but no grave-markers in the SE quadrant. Two architectural fragments (TS048-042004-) from the church, a chamfered jamb stone with a glazing-bar hole from a window and the central head of a twin-light limestone window with decoration on its external face in the form of a marigold pattern within an incised circle, is located SW of the church, have been re-used as grave-markers. The latter may have been from the original E window of the church, and is locally believed to be the grave-marker of a pauper's grave. According to the papal letters, Ballinlacken church was vacant in the year 1491 (McCormack 1989, 14).

The Settlement and Architecture of Later Medieval

This thesis is presented in fulfilment of the regulations for the degree of M.Utt

escarpment from the hills to the northern lowlands (Fig. 32). This was a detached part of

the parish of Kilcooly, 8.4km south west of Kilcooly Abbey (31). The church is sited at an

altitude of 150 metres at the mouth of a small stream valley in the escarpment. Glengoole

in generally sloping ground. The site is adjacent to the main road which skirts the

escarpment and is also adjacent to a small stream from the escarpment.

which the vicarage was given to Gerald Vhyte. Ballenlackey church was then valued at 12

altarage income to Kilcooly Abbey. The church was worth six pounds but had been

reduced to 60 shillings after rebellions by the Cavanaghs and other Irish (Extents Ire. Mon.

Church. The only upstanding remains of Ballenlackey church are a portion of the east wall

and the south west corner with the bottom courses of portions of the west and south walls.

The church was built of uncoursed roughly faced stone. No diagnostic remains of the

of stones against the interior of the east wall which may be the remains of a window.

main road. The grave yard is still in use and graves have been dug in the interior of the

medieval church. The modern grave yard is larger then the original and extends further

south east. The original grave yard is represented by a raised area within the modern grave

yard. A holy well dedicated to St. Patrick is situated in the next field to the south of the site

across the stream, although it does not appear to be still in use.

Parish. The remains of the church are not datable however the historical record allows a

general dating frame of the thirteenth to the fifteenth centuries. It appears to have acted as a

chapel of ease for the community connected to Kilcooly Abbey. 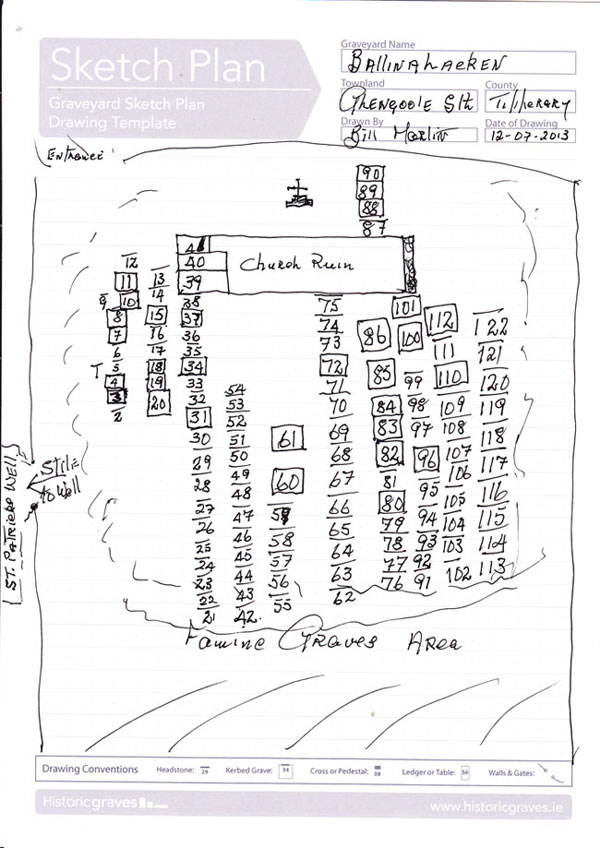