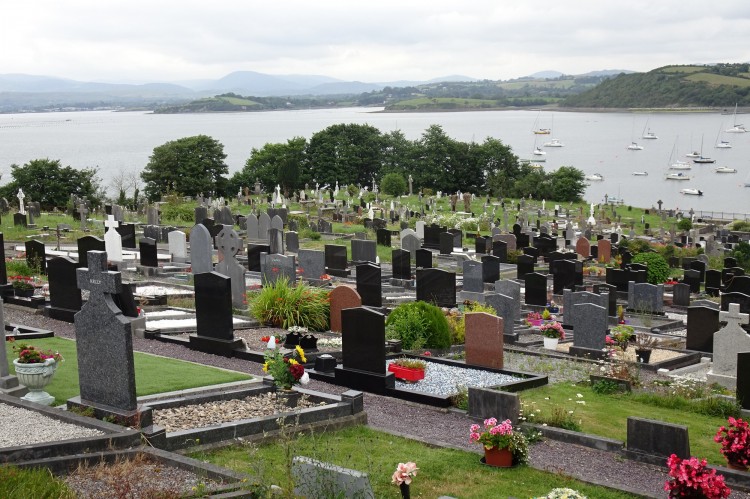 The History of the Franciscan Friary and Abbey Graveyard in Bantry

The Bantry Abbey graveyard stands on the site of the old Franciscan Friary situated on a headland west of the town of Bantry, now known as Ard na mBrathair, the Height of the Brothers. There are 2 dates mentioned for its foundation, 1320 and 1460 although the later date is now favoured by historians. The earlier date of 1320 derives from Franciscan writings from the 1600’s, the ‘Annals of the Four Masters’ written in Donegal and Louvain, Belgium. Another document which translates from Latin as a ‘Short Synopsis of the Irish Franciscan Province’ states that the Bantry Friary was founded in 1320 and its founder was D. O’Sullivan who built a tomb within the Friary for himself and his heirs as did O’Mahony Fionn and other nobles of the area.  Examination of the O’Sullivan genealogy, however, suggests that the first O’Sullivan Chief with a name beginning with D was Dermot O’Sullivan ‘Balbh’, the dumb. In the 1600s, the Franciscan order was in some confusion following the suppression of the monasteries. It seems probable, therefore, that the Friary was founded by Dermot O’Sullivan ‘Balbh’, chieftain of the O’Sullivan Beres who died in 1466.

Unlike other friaries in the south west, such as on Sherkin Island and at Muckross in Killarney there are no ruined buildings extant at Bantry. During the reign of the Tudors following Henry VIII’s break with Rome from the 1530s onwards, monasteries in Ireland and England were suppressed, rendered uninhabitable, and their lands and assets confiscated and assumed by the Crown. The Friary at Bantry was nominally suppressed, although with its location in the far S.W. of Ireland, the Friary at Bantry probably escaped notice and remained untouched. An Elizabethan map of 1558 of Bantry Bay has one of the few visual representations of the Friary. This map was really for military purposes and does not represent accurately the architectural features of the Friary. The map has an east/west orientation whereas today maps have a north/south axis. The map shows the buildings of the Friary having a north/south axis whereas typically, the Nave and Choir would lie in an east-west axis with the altar at the eastern end. The plan of Muckross Friary, for example, shows the usual east/west orientation of the nave and choir, with the cloister and domestic buildings on the northern side. The ground floor rooms were probably used for storage, while above were the dormitories, refectory and Guardian’s quarters.

In 1580, the Friary at Bantry was occupied by English forces during the Desmond wars. Two friars who were captured close to the Friary were killed by being tied together and cast into the sea from a cliff. In 1582, the English contingent was defeated and the Friars presumably returned to their Bantry Friary. In 1602, Donal Cam O’Sullivan Beare demolished the Friary to prevent its use by English forces under Sir Thomas Carew after the Battle of Kinsale.  Donal Cam, the ‘Crafty’, promised to rebuild it once the war was over, but his defeat at Dunboy Castle led him to march with his supporters from Beara to Breffni, and his eventual exile to Spain in the ‘Flight of the Earls.’ The Abbey grounds have, therefore, been in use for over 400 years as the main graveyard for Bantry. The graveyard has been extended over the centuries and since 1909, has included the Protestant plot as the old burial ground at Garrymurchadha (Eng. Garryvurcha) in the town was full. All that physically remains of the Friary buildings, include a carved head, thought to be the likeness of the founder of the Friary and a number of carved stones gathered by monumental masons W. J. Murphy and built to form an Altar.

For a more detailed history of the Friary and Graveyard, see the paper written by Seamus Crowley and published in the Journal of the BHAS,1991.