RESTORED BY HER GRANDDAUGHTER

(LEFT SIDE OF HEADSTONE)

(RIGHT SIDE OF HEADSTONE)

AND IN GODS HOUSE FOREVER MORE

MY DWELLING PLACE SHALL BE

John Bomphray, his wife Mary Stevenson Wiseman and his two children Mary Cameron (born in Dublin 18/09/1907) & George (born in Dublin 11/12/1909) came from Scotland to work on the Mathers estate in Falty as a steward & mechanic. Sadly Mary and her 3rd child (infant son Francis) died during the childbirth on the 30th December 1916 at the young age of 32 years.They were both interred here in Clonburren Graveyard . After the death of his wife, John returned to Scotland where he died on the 19th June 1942 in Kilmarnock, Atreshire, Scotland. John & Mary Bomphray's daughter Mary (May) Cameron went to Canada in 1952. She died in Etobicoke, Toronto aged 69 on the 30th May 1977. George Bomphray died in Ayrshire, Scotland aged 55. Lorraine C Bomphray - daughter of George Bomphray had visited Clonburren Cemetery on two occasions but was unable to locate the resting place of her grandmother. Following the mapping and recording of Clonburren Graveyard by Moore History Group and putting it up on Historic Graves contact was made with Lorraine and in July 2016 Lorraine came again, this time she knew she knew the exact headstone of where her grandmother was interred.

Lorraine had the inscription renewed and had her grandfather's name and date of death added. This was a very special visit for Lorraine as she celebrates the 100th anniversary of her grandmother's death in December 2016.

WHO DIED AT FALTY

THE ADDRESS FOR THIS GRAVE IS FALTY.

JANET JACKSON CAME ORIGINALLY FROM SCOTLAND AND WAS HOUSEKEEPER FOR JOHN ARRES MATHERS IN FALTY.

HIS END WAS PEACE

WILLIAM TURNBULL FERGUSION SENIOR WAS BORN ON THE 17TH APRIL 1838 IN LILLIESEAF, ROXBURGH, SCOTLAND TO JOHN FERGUSON AND AGNES KERR. HE MARRIED ELIZABETH (ELSPETH) BLACK ON THE 22ND JUNE 1860 AT YETHOLM, ROXBURGH, SCOTLAND. HIS WIFE ELIZABETH (ELSPETH) WAS BORN 17TH DECEMBER 1829 TO JOHN BLACK AND MATTILDA MARTHA MILLAR AND WAS CHRISTENED IN JEDBURGH, ROXBURGH, SCOTLAND. THEY MOVED TO IRELAND AND TO THE MATHERS ESTATE IN FALTY, MOORE AND HE WAS EMPLOYED AS A SHEPHERD.THEY FAMILY RESIDED IN RATHPEAK.THEIR DAUGHTER JAMIMA WAS BORN 12TH JANUARY 1870 AND DIED 35 DAYS LATER ON THE 17TH FEBRUARY 1870. THEIR SON WILLIAM TURNBULL FERGUSON WAS BORN ON THE 16TH JANUARY 1877 AND DIED 12TH DECEMBER 1899 AGED 22 YEARS AS RECORDED ON HIS MEMORIAL HERE IN CLONBURREN CEMETERY.

Graveyard surveyed by the Moore History Group in June 2015. Training funded by the Heritage Council.

Clonburren/Clonburn is the smallest of the three historic graveyards in the parish of Moore. This is a mixed burial ground of Catholic, Protestant and Presbyterian. Family names on memorials here are no longer in the parish: St George, D’Arcy, Knight, Bomphray, Wiseman, Stevenson, Ferguson, Harrison, Ramsay, Jackson, Proudfoot and Trumperant Potts. The earliest recorded inscription here is 1801, Patrick Cady. Local stone masons may have used the rich limestone of the Kidlawn and Clonmacnoise quarries to make the grave memorials. Memorial no. 46 displays a blacksmiths tools, memorial no.63 displays a shepherd’s crook. Clonburren is an oblong shaped graveyard located on a north facing slope in pastureland, enclosed by a dry stonewall composed of limestone. Access to the graveyard is through a field gate and across a field of pasture. With good views from the west to the north east, where a large expanse of bogland and the Shannon are visible in the distance. The land continues to rise from south east around to the west. Three miles to the north east is the important ecclesiastical site at Clonmacnoise, while visible to the south of the site is the Esker Riada. In the immediate vicinity is a motte and bailey which is located some 700m to the south east; a cross base and holy well are sited some 400m to the south. Near the centre of the graveyard in the south west quadrant is the poorly preserved west gable of a church and a stretch of the north side wall which is attached to the gable. Burials have taken place throughout this graveyard since early Christian times when it served an early nunnery. The site is one of the few convents known from early Christian times. This convent it seems declined in the 12th century but a church still stood here in the 17th century.

While we have made every effort to achieve accuracy in attaching maiden names and villages to memorials, we accept there may be mistakes. If a reader detects discrepancies or inaccuracies with inscription or footnote, please email us your observations at moore@irelandxo.com .A mapboard (updated November 2017) displaying alphabetical index of memorials is on display at graveyard entrance. 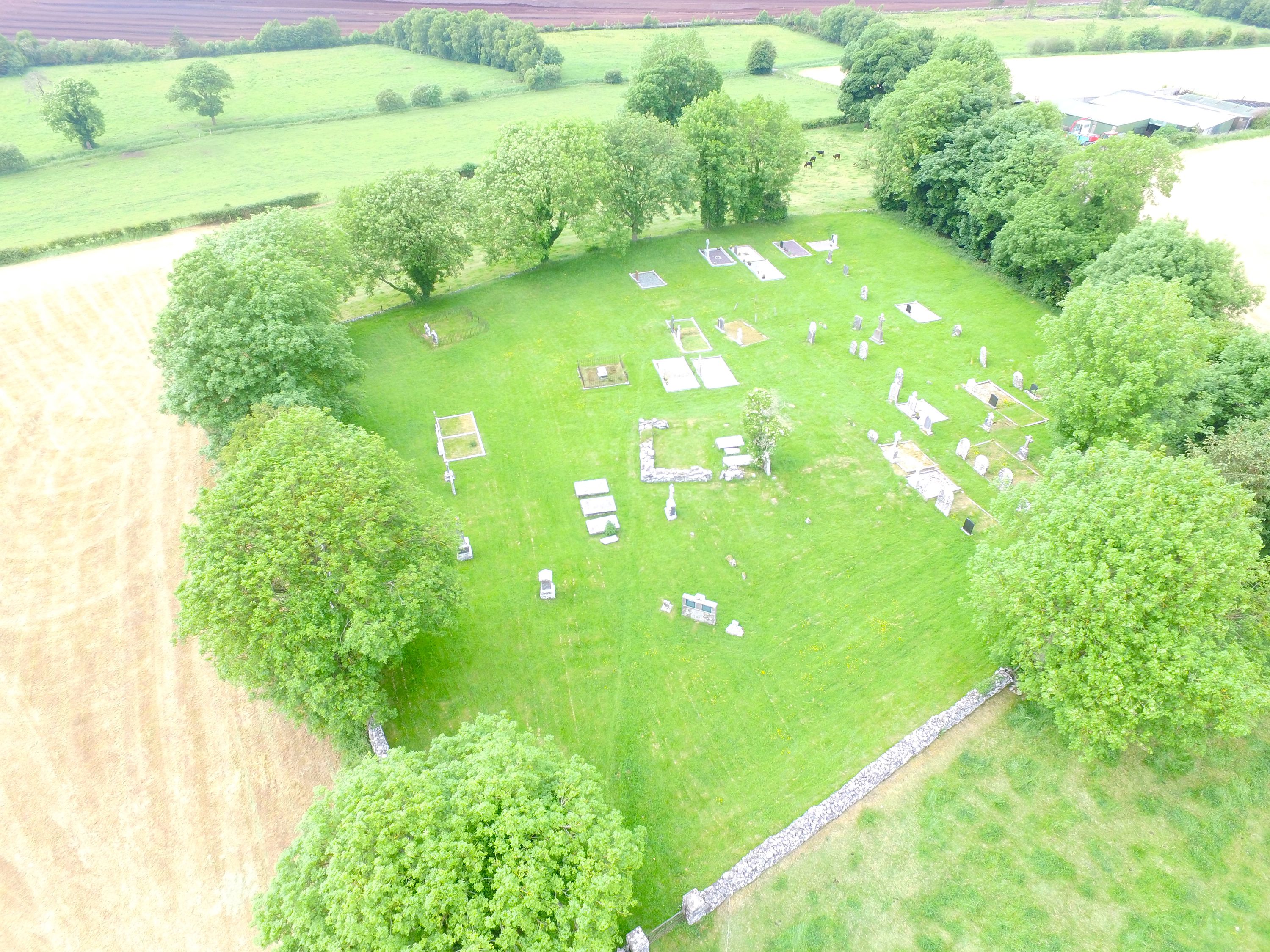 Surveyed by the Moore History Group as part of a project funded by the Heritage Council.

The church of Moore (RO054-024001) is situated towards the S edge of a large circular ecclesiastical enclosure (RO054-024003). The ecclesiastical enclosure is now bisected by a road. The graveyard is located on the N side of the enclosure.Moore south graveyard is bordering a road in a south facing slope in a area of fertile grasslands. Tully castle is situated some 900m to the south west. Its a roughly d shaped graveyard (east/west c.90m, north-south c.50m), enclosed by a dry limestone boundary wall. Main access to the graveyard is through a iron gate flanked by two mortared limestone pillars centrally placed in the south wall. Within the graveyard a variety of grave types are present including a number of extremely large vertical slabs, some of which reach a height of 2m.

Local stone masons may have used the rich limestone of the Kidlawn and Clonmacnoise quarries to make the grave memorials. Memorial no. 113 displays an ornate tradesman symbol, memorial no. 114 displays a cross and lamb as a symbol of Christ and no. 119 displays a peacock representing the Resurrection with gaelic script ‘beannnas’ at the base of memorial. The oldest recording is memorial no. 147, the death of Honer Farrell in 1726. This memorial has the stone mason’s initials engraved in the lower right corner.

While we have made every effort to achieve accuracy in attaching maiden names and villages to memorials, we accept there may be mistakes. If a reader detects discrepancies or inaccuracies with inscription or footnote, please email us your observations at moore@irelandxo.com . A mapboard displaying alphabetical index of memorials is on display at graveyard entrance & included in the photos here. 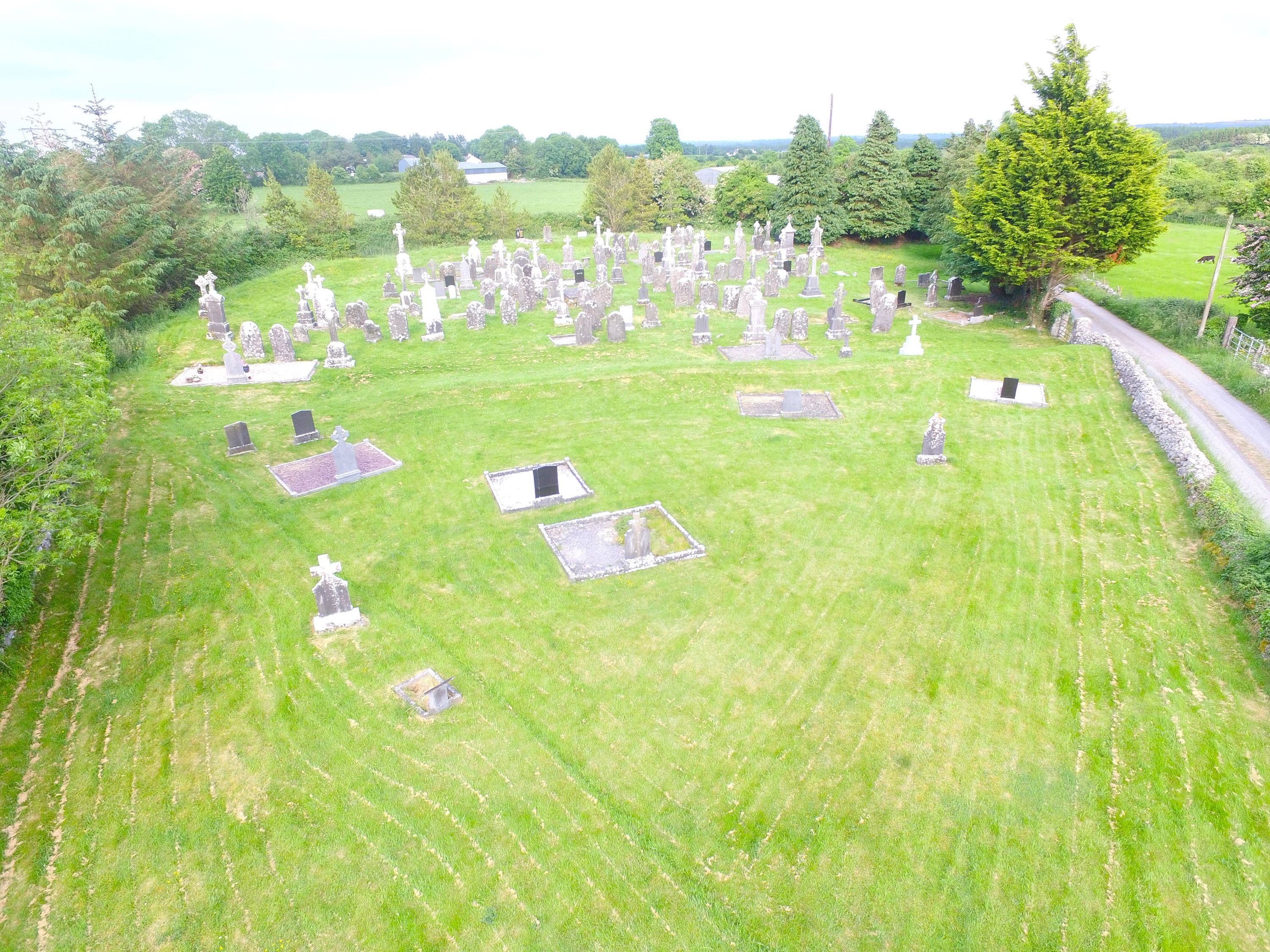