O LORD HAVE MERCY ON THE

SOUL OF WILLIAM RYAN WHO

ERECTED BY HIS SON

The address for this headstone is Coolderry, Ballinasloe. Patrick Barrett was son of Thomas Barrett & Bridget Caulfield, Liberty, Ballydangan born on the 14th May 1893, he married Mary Goode, Cappahuse also in the parish of Moore, daughter of William Goode & Ellen Naughton on the 29th January 1923. Their first born children were twins born on the 6th December 1923 one was a still born & the second was Thomas who died 25th December 1923. The Barrets moved from Liberty to Coolderry on the 25th March 1927 when the Mather's Estate was divided. (Mathers was the local landlord who lived in Falty.) Six siblings of Patrick Barrett went to the Boston area of the USA. They were Kate, Ellen, Mary, John, James & Bridget. William Barrett son of Thomas & Bridget born 20th April 1900 & died 31st March 1901 aged one year.

IN MEMORY OF WILLIAM DUFFY

ERECTED BY THE DUFFY FAMILY

THOMAS DUFFY'S ADDRESS WAS DERRYNEIL AS WAS JOHN DUFFY.

PRAY FOR THE SOUL OF

ERECTED BY HIS WIFE

THE ADDRESS FOR THIS GRAVE IS FALTY.

DELIA GRENHAM WAS NEE COGAVIN FROM MOORE NORTH AND WIFE OF MICHAEL GRENHAM.

THE ADDRESS FOR THIS GRAVE IS DERRYLAHAN. 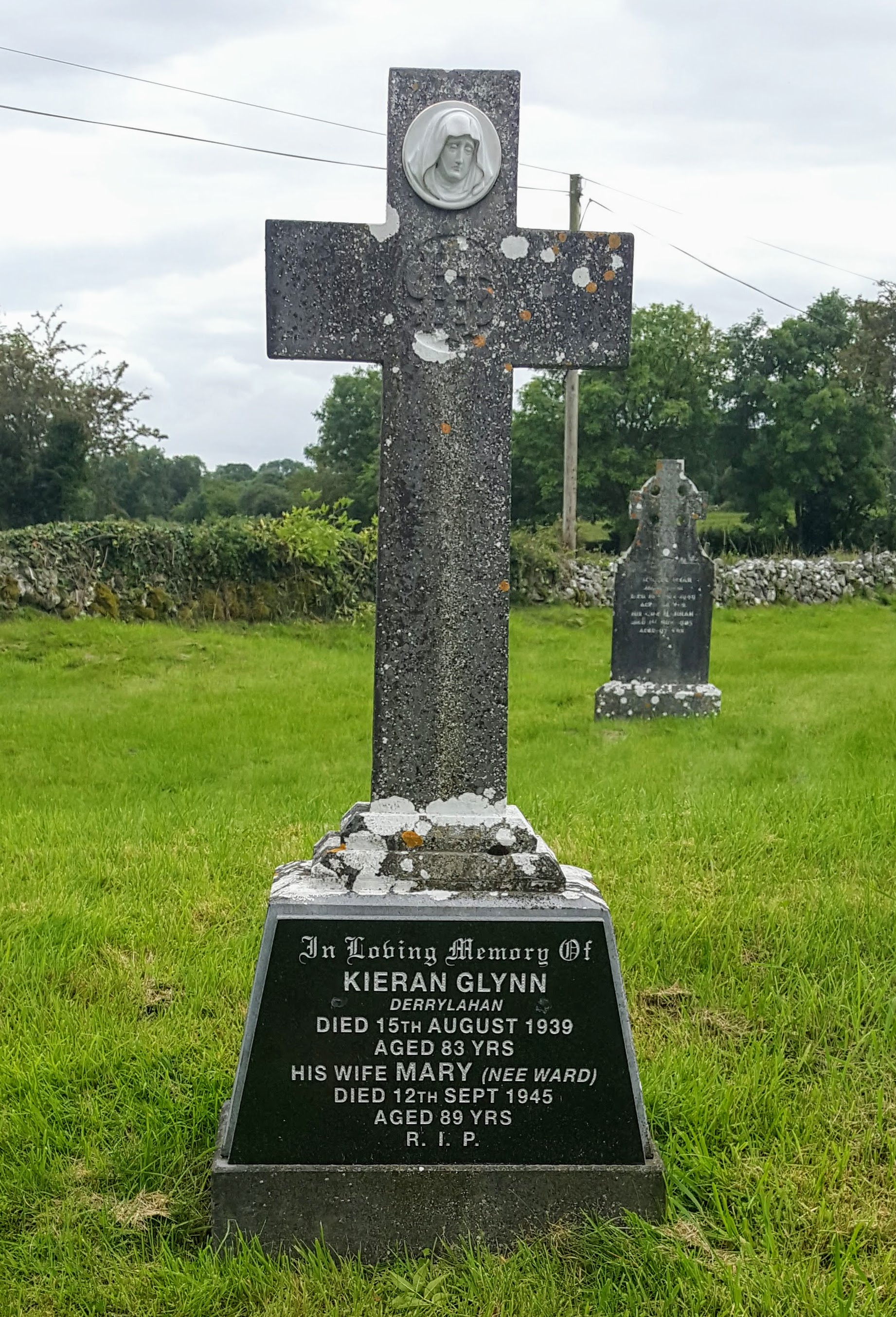 ERECTED BY THEIR FAMILY

The address for this plot is Toberaheen, Ballydangan, Birchgrove & Dublin.

Teresa was sister of Mary & Kate Tumulty interred in plot No 9.

The address for this grave is Kilcastle.

William Kelly, Clonbulia  married Mary Tumulty, Ballydangan, daughter of Michael Tumulty & Teresa Millar (Owners of Millar's pub, Ballydangan) on the 3rd August 1915. Following the death of Michael Tumulty (1857-1897) & his wife Teresa (1856-1894) their four girls Bridget, Mary, Teresa, Kate & son James born 17/01/1892 & died six weeks later on the 03/03/1892  were cared for by their first cousin Mary Ann Ward, Clonshask daughter of Thomas Ward & Maria Tumulty who became their guardian & also ran Millar's Pub, Ballydangan. Following the death of Mary Tumulty/Kelly in 1932 her sister Kate Tumulty came to live with William & the family. When Kate died on the 18/01/1955 she was buried with William Kelly & his wife Mary here in this plot.

Mary Tumulty's sister Teresa married Michael Kelly, Kilcastle on the 21st February 1916. They were parents to seven children. Teresa died 14/05/1950 & is interred in Plot No 10.

ERECTED BY HIS LOVING WIFE & FAMILY

SHE WAS DAUGHTER OF JOHN & ANNIE MCMANUS (NEE GREENE, DERRYLAHAN)

WHO LIVED IN NURE.

THE ADDRESS FOR THIS GRAVE IS MOORE SOUTH

THE ADDRESS FOR THIS GRAVE IS CAMCLOON