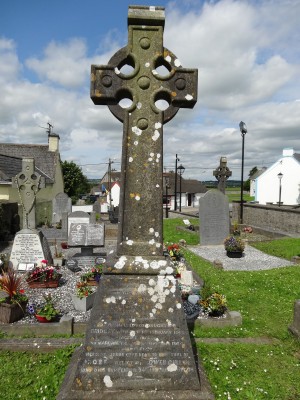 Sacred to the memory of
Owen Cullen
of The Commons
Who departed this life 7th Oct 1869
Aged 65 years.
Also of his beloved daughters
Bridget who died 14th February 1848
Aged 7 years.
And Margaret on the 17th September 1869
Aged 19 years.
Merciful Jesus give rest to
The soul of
Rose relict of Owen Cullen
Who died September 24th 1891
Aged 80 years.

Left hand side of headstone :

Right hand side of headstone :

The Cullen grave is located on the right hand side of the Churchyard . The headstone is erected to the memory of Owen Cullen , local Mine Manager , and his family , who resided in Coalfield House The Commons at the time of the 1848 Young Ireland rebellion at the nearby Widow McCormack's house . The leader of the rebellion, William Smith O Brien wrote to Cullen on the morning of the rebellion . The contents of this letter are now transcribed here below ( with an introduction by Professor William Nolan ):

The events of the week 24 - 29 July, 1848 have special significance for the people of The Commons. The 1848 Young Ireland & National flag monument erected in 1989 at the cross-roads in the village tells us that it was here in Sullivan’s Public House (now Maisy Dunne’s) that some of Ireland’s most distinguished patriots met on the evening of Thursday 28th July, 1848 to determine a course of action for the Irish Confederation - We now know that apart from William Smith O’Brien, James Stephens, Terence Bellew McManus and Patrick O’Donohue, the other leaders left the Commons to prepare for a Rising in Autumn. The encounter at the Warhouse next day terminated all these plans. Included here is an item concerning 1848 which is little known ; it’s the Smith O Brien letter to the Mining Company of Ireland which indicates his sympathy with the plight of the miners , many of whom had been laid off due to the recession caused by the Famine. This letter was written some time during the early morning of 29th July, and delivered to Mr. Cullen, Manager of the collieries. It was one of the Acts of Treason with which O’Brien was later charged at Clonmel. The letter demonstrates that O’Brien was not oblivious of the world of commerce and it may well have been the first reference to nationalization of the Mines.

“Mr. William Smith O’Brien presents his compliments to the Directors of the Mining Company, and feeling it incumbent upon him to do all in his power to prevent the inhabitants of the collieries from suffering inconvenience, in consequence of the noble and courageous protection afforded by them to him, takes the liberty of offering the following suggestions:- He recommends that for the present the whole of the proceeds arising weekly from the sale of coal and culm be applied in payment of men employed by contract in raising coal and culm”. “He recommends that a brisk demand be encouraged by lowering the price of coal and culm to the public.”

“In case he should find that the Mining Company endeavours to distress the people by witholding wages and other means, Mr. O’Brien will instruct the colliers to occupy and work the mines on their own account; and in case the Irish revolution should succeed, the property of the Mining Company will be confiscated as national property.”

“On the contrary, if the Mining Company observes a strict and honourable neutrality, doing their utmost to give support to the population of this district during their present time of difficulty and trial, then their property shall be protected to the utmost extent of Mr. O’Brien’s power”.