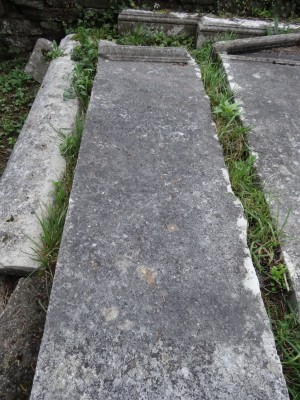 MAJOR IN HER MAJESTY'S SERVICE

HIS REMAINS ARE DEPOSITED IN

HERE BYETH THE BODY OF C. ST. JOHN. A. CLERKE

COLONEL OF HIS MAJESTY, SECOND SON OF

HERE ARE DEPOSITED THE REMAINS OF ...

WITH HER INFANT SON WILLIAM

The funeral of General Clerke took place yesterday.  Notwithstanding the inclemency of the weather, a considerable number of gentlemen attended, amongst whom were several of the Freemason body, of which order General Clerke was one of the oldest, if not the very oldest member.  The cortege started from Mountjoy Square at about half past eleven o'clock and proceeded direct to the King's bridge Terminus.  The coffin was conveyed by the one o'clock train to Kilbrogan, Bandon, County Cork, where, in accordance with the wishes of the deceased, his remains were deposited in the family vault.

The late General St. John Clerke was an old and esteemed member of the Friendly Brothers' Order

Louisa Sarah Clerke was the youngest daughter of Dr Jonathan Clerke and sister to General St John Clerke.  She married William Holland Kingston, the brother of the famous SIr George Strickland Kingston.  She died in 1839 in Sydney, New South Wales

Sir Thomas Henry Shadwell Clerke, brother of Louisa Sarah and St John Augustus was born in 1792. He followed an army career as did his brothers, St John Augustus Clerke and William Clerke.  He was sent to the Royal Military College, Great Marlow where he distinguished himself and was appointed an Ensign in 1808.  He served through the Peninsular campaigns until the loss of his right leg in the combat at Redinha in 1811.  He was made K.H. in 1831.  He became a military journalist and the first editor of Colburns United Service Magazine in January 1829.  At the time of his death he was an F.R.S, a vice president of the Royal United Service Institution of which he had been one of the originators, a fellow of the Royal Astronomical and Geological Society and for a time honorary foreign secretary of the Royal Georgraphical Society.  He died at his residence, Brompton Grove, England of paralysis on 19th April 1849