A Workshop in Kells Co. Meath 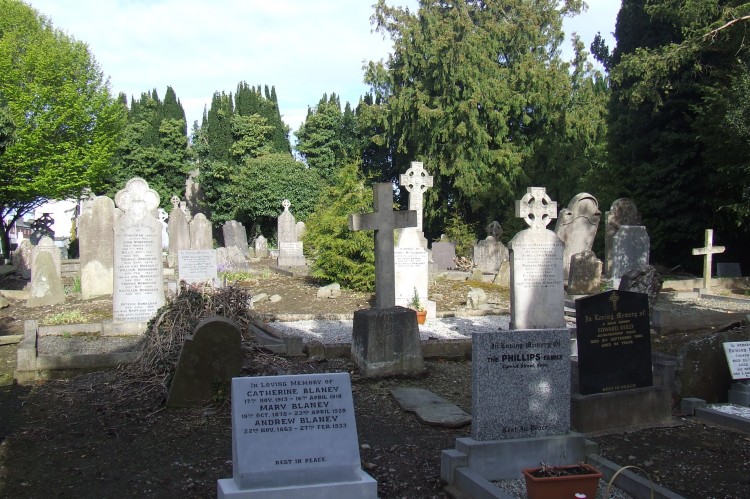 It is easy to miss St John’s cemetery in Kells Co. Meath as it is tucked away behind a large stone wall on Headfort Place to the south of the town. It also gets somewhat overshadowed by St Columba’s graveyard located on the top of the hill which contains numerous high crosses, an early church and a round tower. St John’s cemetery however is interesting in its own right and is well worth a visit. The Historic Graves project used the graveyard as a location for one of our workshops which forms part of an historic graveyard care and conservation course which we are presently running in conjunction with Meath Partnership.

We had a group of about ten people in St John’s graveyard last Friday, the 27th of April, where we ran through our graveyard recording systems which included a geotagged photographic survey of the inscribed memorial stones. We also introduced the group to our memorial recording forms and took them through some techniques to reveal some of the more weathered memorial inscriptions such as oblique lighting and low impact rubbings.

The cemetery has an interesting history as it is thought to be located within the grounds of a Priory of the Hospitallers of St John which was founded by Walter de Lacy in 1199. Walter was the son of the famous Hugh de Lacy who was granted the kingdom of Meath by Henry II in 1172. There is an Early Christian cross slab within the cemetery and a probable 13th century effigal tomb. A set of stone steps allows entrance to the graveyard of Headfort Place and the rectangular shaped cemetery is raised above its surroundings. There are mature yew trees within the cemetery particularly to the north of the interior where the ground rises towards the centre before falling away again along the southern boundary.

One of the participants on the course is Emilie Gustafson who is a trained archaeologist. Emilie had conducted a measured survey of the cemetery on behalf of Kells Archaeological and Historical Society during the winter of 2009. Emilie divided the cemetery into twelve sections (A-L) and numbered the inscribed memorials within each section. Once the survey was complete all of the legible inscriptions were then recorded. The fruits of Emilie’s survey are displayed on a plaque at the top of the entrance steps to the graveyard and are also available to view on the Kells Archaeological and Historical Society website.
We decided to correlate our geotagged photographic survey with Emilie’s survey and all of the inscribed stones were photographed during the workshop. Historic graveyards and cemeteries are always in a state of flux and conditions change. Even in the space of the two years since Emilie’s survey a number of changes were noted. One of the memorial stones had been relocated and reset into the ground. Another medieval cross inscribed slab had also been relocated and laid face down so that the cross was no longer visible. Two new memorial stones had also been erected. During our morning in the cemetery the light conditions kept changing and inscriptions and iconography on the memorial stones became visible and invisible as the direction and strength of the sunlight changed across the morning. We have noted this phenomenon before and it was again a really striking feature of our morning’s survey in Kells.
In the afternoon we had the use of the well appointed computer suite in the Meath Partnership offices on the outskirts of Kells. We outlined the structure of the Historic Graves website and demonstrated the steps involved in uploading that days geolocated memorial photographs. The group then signed up to become Historic grave transcribers, logged into the website and began transcribing some of the memorial inscriptions. It was a really enjoyable day and the data collected will gradually populate the St John’s cemetery page of the Historic Graves website and will also be archived with the Kells Archaeological and Historical Society.
Blog category:
Places