The Wonders of Fore Co. Westmeath 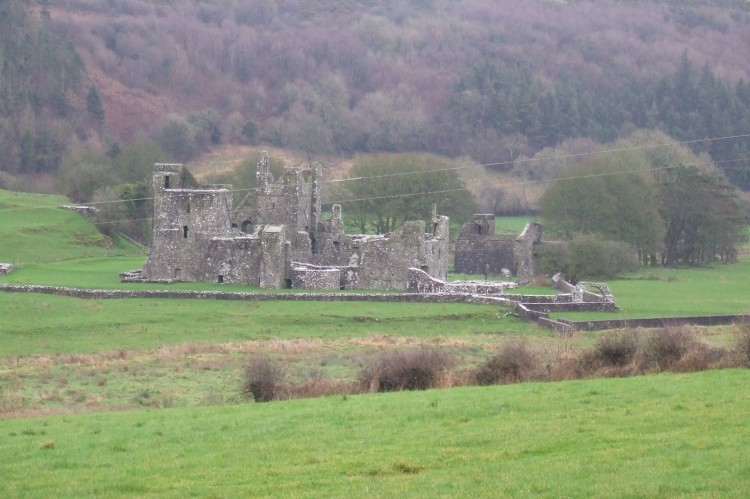 A quite valley in the rolling hills of Westmeath north of Mullingar contains the small village of Fore. As you leave Castlepollard and turn right off the main road and up the small valley a view of the ruins of a Benedectine Priory rising from the flat valley floor is the first thing to strike you and as you enter the valley the rich archaeological and historical heritage contained within jumps out from every slope and flat field.

It is an amazing place which contains the upstanding remains of numerous archaeological features and is associated with St Feichín who founded an Early Christian monastery there around 630 AD.
The seven wonders of Fore are connected with St Feichín’s miraculous powers and are listed as;
• The monastery in a bog
• The mill without a race
• The water that flows up hill
• The anchorite in a stone
• The water that won’t boil
• The tree that won’t burn
• The stone raised by St Feichin’s prayers.

I was there to meet Councillor Frank McDermot who following in his fathers footsteps is the primary driver in preserving, conserving and promoting the jewels which Fore has to offer the visitor. Frank is hoping to update some of the facilities and provide a series of walked loops around the valley which will highlight both the archaeological and natural heritage which are so well preserved in the valley (this preservation it is only half jokingly declared is down to the lack of development in Fore since the time of Hugh de Lacy). We were joined on a circuit of the proposed looped walk by my daughter Ruby and by Bartel D’Arcy from Belvedere House.

The looped walk starts in the visitor car park and heads north-west along a path towards the imposing ruins of the priory. Along the way it passes the remains of a mill and two holy well’s replete with rag trees. A dovecote to the rear of the priory offers great views back towards the ruins of an early church associated with St Feichín and the anchorite cell, which, are both located on the south western slopes of the valley sides. The walk then loops north and east passing the ruins of a vernacular cottage which was our guide, Frank McDermott’s mother’s house. To the south of the cottage in the middle of the valley is another spring marked on the Ordnance Survey first edition map as ‘Toberfoolagh’. The large but overgrown remains of the motte and bailey castle built by Hugh de Lacy then looms into view and the planned walk skirts the lower slopes of the hill which is surrounded by the deep ditch of the bailey. The path then heads south across fields and regains the road and approaches the village from the east side. It passes the up-standing eastern gate (the western gate is also up-standing) of the town fortifications which were completed in 1438 after Henry VI created a murage grant for walling the town and paving its streets. The present day church and graveyard dedicated to St Mary are also passed on the eastern approach to the village. The market place at the centre of the village is adorned by an ancient carved stone cross reputedly one of eighteen such crosses in the vicinity of fore. The ruins of an old Gaol dating to the late medieval period and which was the old Meath county gaol can also be found on the northern side of the Market place.

The early segments of the ruined church overlooking the road heading west out of the village is possibly associated with the original Early Christian monastery founded by St Feichín and which at one point was home to 300 monks. A flat headed doorway in the western gable is composed of a single massive block of stone which is one of the seven wonders of Fore. Further up the slope is a tower structure of 15th century date which originally formed part of the town defences and was later added to in the 17th and 19th centuries. It is believed that it was lived in by hermits and may have occupied the site of an earlier cell associated with Early Christian monastery. In 1680 Richard Nugent the 16th Baron of Delvin restored the tower and converted it into a family mausoleum and a small oratory was also built.
We had a wonderful morning walking around this unique historic landscape. The atmosphere was enhanced by the sights and sounds of a local hunt which was careering across the hills as we were on our walk around and also by the peeling of the church bells. I would thoroughly recommend a visit.
Below are some short audio snippets recorded on the day.
Blog category:
Places