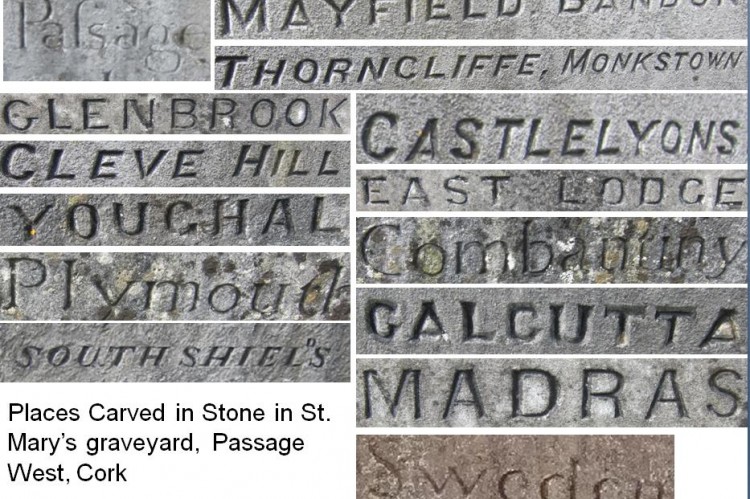 After a day of recording in St. Mary's graveyard in Passage West Jim Murphy suggested we pay a visit to the old church graveyard in Ardmore townland about 1 km to the west. Jim is a maritime historian whose book  ‘Salt Water and Rust in their Blood – Passage West, Lower Harbour and the Sea’ makes a strong case for the high tourism potential of maritime heritage in Ireland in general and Cork harbour in particular. The maritime families of Passage West and the Lower Harbour travelled the world and their ancestors are scattered far and wide, many of whom have been travelling back to Passage West in recent times to see where 'they came from'.

Besides the global reach of Passage West a fascinating dimension of the maritime heritage of village has been identified in Ardmore graveyard. Jim and Waltie Murphy have identified that the shipwright and ironworkers skills extended into the making of grave memorials. Three turn of the 19th/20th century timber grave memorials are still standing in Ardmore and although I have seen photographs of similar 19th century grave markers these are the first I have encountered, still extant, in Irish graveyards. There are also iron grave memorials from the Hive Ironworks in Cork city and we find them throughout the county but there are also iron crosses cut out in the shipyard workshops of Cork harbour. These fall into the category of vernacular grave memorials, made from materials locally sourced and with local skills.

We always say that the history of a parish is in its graveyards - in Passage West this is confirmed with the maritime wood and ironworking trades being present in a rare combination. Without the research of Jim and Waltie these rare finds would not have been made!
This work is being done as part of a SECAD funded community led project in collaboration with Cork County Council.
Blog category:
Places