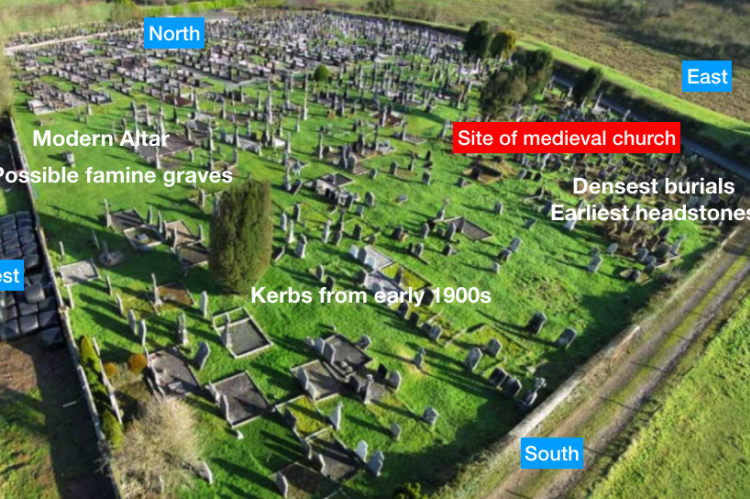 Historic graveyards are compasses in the landscape.

If you're ever lost in the Irish countryside, a graveyard can help you get your bearings.

Because, historically Christian burials face the East, wherein the sun serves in persona Christi, our graves tend to run from west to east with the head at the west, feet at the east, and thus are considered to be facing east. This changed sometime in the mid 1800s, Christian burials didn't have to face E, although in Ireland we tend to do so if possible, and often, even if the headstone faces N, or S, or W, the coffin may indeed gone into the grave with a W-E orientation (gravediggers know these things).

Because we buried our people facing E and because we reused our grave plots on a regular basis, rows form in our graveyards. Rows are a means of keeping order. We sit our school children in rows, we plant our spuds in rows. We bury our people in rows. The rows tend to run S-N and this helps us in our surveys because most of the E facing headstones can be photographed in the morning. Graveyards where headstones face in multiple directions are more difficult to get high quality photo surveys done. Overcast days can suit these graveyards better.

Churches 'face' east also. The E gable usually has a window through which the morning shines onto the altar, again in persona Christi. So any church built before the 1830s is likely to be strongly aligned W-E ie. lengthways. N of the church is usually sparsely occupied while S of the church is prime burying ground. It is the sunny side of the graveyard, mostly, and it is also more densely occupied by older headstones.

In this example from Duhallow in N Cork we show a slightly more complex example. Clonfert is one of the largest graveyards in the Historic Graves website but it still tends to to conform to the historic geography of historic graveyards. The graveyard has probably been used for burials for well over 1000 years. The name itself, means the plain of the burials, as gaeilge.

Anyway, we're not sure where the medieval church sat, but it was somewhere near the red label on the graveyard photograph. Most of the old burials are S of that location. Thereafter, this graveyard which serves multiple parishes spread westwards up the hill and then northwards across the hillside. Anywhere you see kerbed burial plots are probably 20th century onwards. Kerbs came in from 1880s onwards, initially in posher Church of Ireland graves, but from 1910s onwards kerbs were being used all over the country. They are often now inserted into older sections of graveyards although they do not always suit the character of the graveyard. Kerbs tend to be our friends when we survey graveyards as they tend to define strong, easy to read, burial rows. One trick when traversing a packed  graveayad is to resist the temptation to step onto kerbs, they are often loose and wobbley and can be damaged by heavy-footed surveyors- we tend to step over them.

(The oblique mast photograph was taken by the Air Take team).