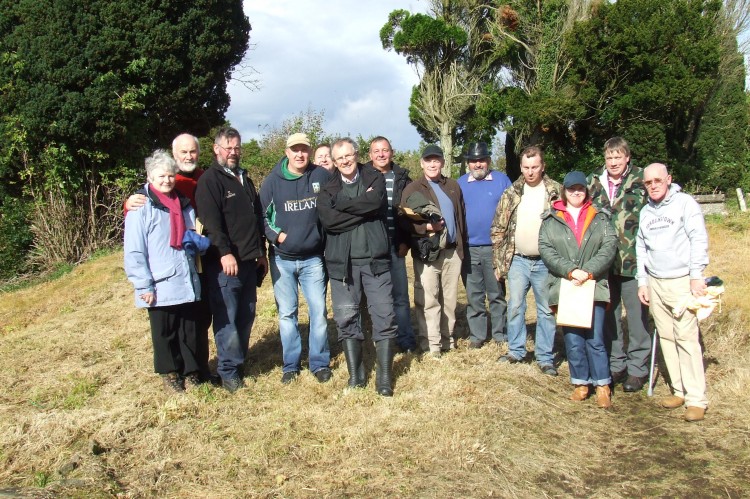 We recently spent a wonderful Saturday giving one of our survey workshops in Kill graveyard in the townland of Drumhurt just south west of Cootehill in Co. Cavan. A committed group of around twenty people showed up on a dull and slightly damp morning. The graveyard is oval in plan and is defined by an earthen bank to the west and north and a boundary wall which separates the graveyard from a curving road to the east and south. The graveyard splays out around a low mound which has a number of large yew trees towards its summit. According to the National Monuments Service this mound may have been the site of a parish church which is mentioned in 14th century documents, however, no trace of a building now remains. There are however many fine memorial stones visible throughout the graveyard. The southern half of the graveyard had been cleared using a strimmers in preparation for the workshop and we concentrated our preliminary survey in the south eastern quadrant.

Following a well developed formula John Tierney welcomed the group and gave a brief introduction to what we hoped to achieve that day. We split the group in three and got stuck right into some recording. The memorial stones were numbered and then photographed and geolocated with the GPS enabled camera. Some of these stones were then fully recorded using our specially designed record sheet. To help record the fainter inscriptions the group used both low impact rubbings and oblique lighting to reveal some of the hidden detail. At the beginning of the day there was some talk of sandblasting the headstones in order to sharpen up the inscriptions but hopefully such notions were dispelled! As the group got hands on experience of using the character retaining and conservation friendly techniques they realised they were very effective in deciphering the inscriptions.

As the morning progressed the dullness began to lift and the October sun began to poke through the clouds. This had a wondrous effect on the memorial stones as the faint inscriptions and fine decorative motifs were revealed by the low sunlight. It was a vivid reminder that patience is required when undertaking a graveyard survey. It is important to examine the memorial stones in a range of weather and lighting conditions. Gerry Mullens has described to me how he returned daily over the course of a year in order to photograph for publication the memorial stones in a graveyard in Kilnahue Co Wexford. The resultant book Kilnahue Churchyard Gorey: A Survey of the Iconography and Inscriptions has the most splendid photographs of the memorial stones which reveal all of the inscribed detail. Patience was the key.
On a previous workshop in St Colman’s Church of Ireland graveyard in Clontibret we stumbled across an eighteenth century headstone which had distinctive carving on the reverse side of the stone to the inscription. The example at Clontibret had a cross, stars and a heart inscribed, however, other stones in the Cavan/Monaghan/Fermanagh area

have mortality symbols inscribed on the reverse side. In a previous blog post we promised to keep our eyes peeled for examples of these distinctive mortality memorials which according to McCormick date to between 1720 and 1770. As we examined a memorial stone in Kill which was erected by Philip Olwill in 1768 we noticed that a number of mortality symbols were inscribed on the reverse side to the inscription. A skull and cross bones set above a coffin and flanked by an hour glass and bell were all clearly visible. This particular memorial stone then appeared to be a late example of a mortality memorial which are distinctive to this particular part of the country and may owe their origin to similar Scottish Jacobean monuments which are largely confined to Scottish towns such as Edinburgh and Stirling.
We had a great morning in kill graveyard and met a wonderful group of enthusiastic people. That afternoon in the local hotel we uploaded and published a number of the memorial stones from that morning’s survey. We look forward to seeing many more graveyards being published in Co. Cavan as the workshop participants set about surveying their own local historic graveyards.
Blog category:
Places