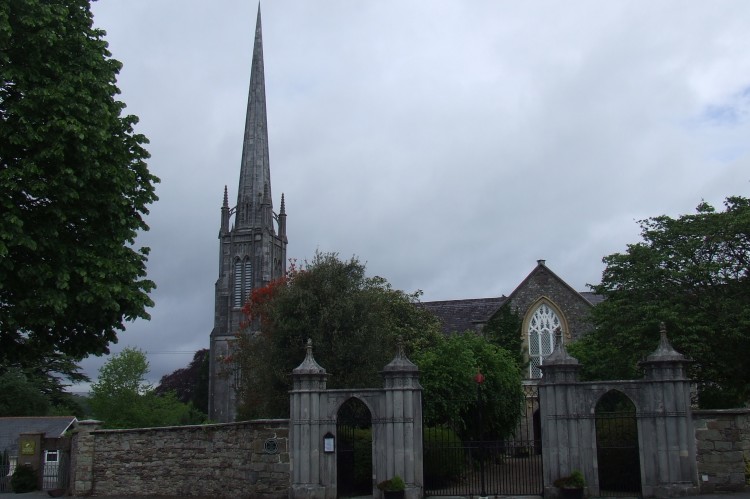 On a recent trip to the south coast of Ireland we took in the well known delights of Killarney and Kinsale and ended our southern sojourn in the  historic town of Lismore, in County Waterford. The small town lies on the southern side of the river Blackwater and is dominated by St Carthage Cathedral and Lismore castle which both occupy the steep ground on the southern bank of the river and tower over the bridge which crosses it. A spectacular riverside walk follows a track along the river, up the steep sides of the valley and around St Carthage Cathedral. In the best tradition of graveyard tourism I couldn’t resist a peek at the historic graveyard surrounding the cathedral and was rewarded for my curiosity by a beautifully kept example with many eighteenth century memorial stones. There is a spectacular 16th century chest tomb in the nave of the church and a series of 9th to 11th century memorial stones now set into the west wall.

The cathedral is located on the site of a famous early Christian monastery founded by St Carthage also known as Mochuda in 635 AD. The monastery flourished even though St Carthage himself died only two years after arriving. It became a great seat of learning and was known across Europe as the University of Lismore. The tall tower is the latest addition to the present church and was added during renovations in 1827. It was during excavations for the tower that the early memorials, which link back to the earliest monastic church and are now set into the west wall, were discovered.

The McGrath tomb in the nave of the church is a beautifully carved memorial tomb and is one of the finest examples of 16th century stone carving in Ireland. The twelve apostles are depicted on the southern and northern sides of the tomb. The eastern end depicts St Carthage alongside, St Catherine one of the great early Christian martyrs and St Patrick. The western end depicts the crucifixion.

The covering slab’s main inscription runs around the outside of the slab between the emblems of the four evangelists and records John McGrath and his wife Catherine Prendergast having the tomb made for themselves and their posterity in 1557. The middle of the slab is occupied by an elaborate cross of eight points. An unusual feature is the way the bands of the cross, meet in the centre to form a swastika - a symbol which has a 3,000 year history before its later notorious adoption. The carving also depicts Pope Gregory the Great with a three tiered tiara, a resurrection scene with Jesus shown with his hands crossed and tied, below which, is a three legged skillet pot with a bird emerging from it – described by Garstin as the crowing cock reminding St Peter of his denial. There are also two shields depicting the McGrath coat of arms and the heart of the Blessed Virgin Mary pierced by seven swords representing the seven sorrows. The McGrath tomb and its fine stone carving is described in fascinating detail by John Ribton Garstin in Vol.34 of Journal of the Royal Society of  Antiquaries dating to 1904.

During a recent Historic Graves workshop in Barony graveyard in Lisdowney, Co. Kilkenny our visiting iconography expert Gerry Mullins spent time explaining a carving which depicted the passions of Christ a well known memorial motif . According to Carrigan in his History and Antiquities of the Diocese of Ossory (Vol 2) the carving probably originally formed the side wall of a nearby Butler chest tomb dating to 1634. One of the symbols on the carving was that of a bird emerging from a three legged skillet or pot. The representation nearly exactly matches the pot and bird from the McGrath tomb in Lismore. Gerry speculated whether the bird from the butler tomb might actually represent a phoenix rising from the ashes. This interpretation of the bird and pot would also seem to fit the McGrath carving as it is located directly below the resurrection scene.
A trip to Lismore in co. Waterford could only be recommended and if the delights of St Carthage Cathedral and riverside walks fail to enthral then dinner in the brilliant Chophouse restaurant could be of some consolation.
Blog category:
Places