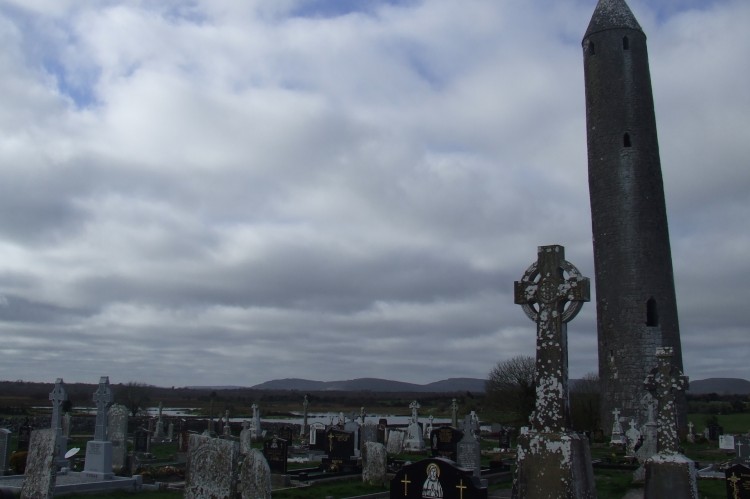 On an unseasonably mild Saturday morning I took a spin down to the early Christian monastic site of Kilmacduagh located just west of Gort in south Co. Galway. It has one of the finest collections of churches in Ireland along with a remarkably well preserved round tower. The site is associated with St Colman who was the son of Duagh and the name Kilmacduagh can be translated as ‘the church of the son of Duagh’. In the lowlands of south Galway it was the principal ecclesiastical foundation under the patronage of the kings of Ui Fiachrach Aidhne in early medieval times. In later medieval times it became the seat of a diocese of the same name, which was co-extensive with the baronies of Kiltartan and Dunkellin.

There is a graveyard which is still in use today surrounding the round tower and the cathedral. During my visit three generations of women from the same family, the youngest a small toddler, were visiting the grave of a loved one. To the south west of the complex a turlough was in flood. These seasonal lakes are a feature of this part of the country which has a limestone geology and produces complex and puzzling drainage patterns. The site is overlooked to the west by the distinctive profile of the burren uplands.

Below is a photo story of my visit – I couldn’t stop taking photos of the round tower. It is coupled with an audio soundsacpe in which can be heard the wind, the rich birdlife attracted by the turlough, an excited toddler and the distant sound of a machine working in the rocky limestone ground.

This a link to a you tube video up loaded by BurrenBeo Trust outlining the legend of St Colman as told by the students of Tubber national school.