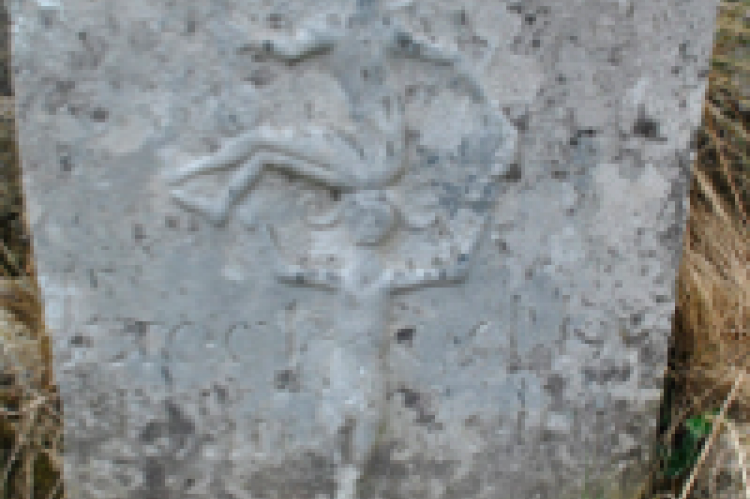 This rather unusual crucifixion scene is to be found on a small rectangular headstone located in St. Thomas' medieval graveyard in the parish of Peterswell Co. Galway. It bears the simple inscription 'Erected by John Riley AD 1846'.

The iconographical scene is uncommon for such a late headstone. It clearly shows the figure of the crucified Christ shown in His earthly state, only scantily dressed by a rather narrow loin cloth to protect His modesty. The feet are crossed indicating that they were fixed to the cross by a single nail, while His arms are extended upwards with the muscles flexed in the act of supporting aloft a second figure, which appears to be naked. On close inspection it is obvious that there is in fact no cross pre- sent in the scene, though the crucifixion is one of the central themes being portrayed. The question, however, is, if it is Christ who is depicted in the lower position, then, who is it that is portrayed in the upper position? To help us answer this question there are a few important religious symbols present. On examining the detail and the general detail of the religious iconography we can determine that the lower figure is meant to represent the 'Living Christ', as opposed to the 'Dead Christ' so perhaps the lack of a cross is in itself symbolically charged.

The second figure which is held aloft by the 'Living Christ' holds
an orb with a cross emanating from it in His right hand. A second small Greek cross adorns the orb. The orb and cross are symbols of majesty and triumph and are commonly found in medieval art though not as regular a feature in modern grave art. The figure also bears wings so clearly represents the Spirit rather than the Mortal. So is in fact what we are seeing is Christ Triumphant or Christ in Majesty. This is the type of religious motif is one more commonly found on the upper section of Irish medieval high crosses, than on eighteenth- and nineteenth-century headstones. Never-the-less the religious message and scriptural con- text is the same.
The overall iconographical theme seems to be inspired by the passage from 'Luke 23:47' where 'Jesus, crying out with a loud voice, said, "Father, into your hand I commit my Spirit." Having said this, He breathed His last'. It seems likely that we are witnessing here on this nineteenth-century headstone is the moment of Christ's death, where we are presented with the Living or Dying Christ offering up His own soul. We can therefore conclude that both figures in their own way represent different sides of Christ; the former the 'Living Christ', the latter the risen Spirit of the 'Dead Christ'.

Even if we accept that this interpretation is correct, we are still left with a second problem, that is the identification of the stone-cutter responsible for this deeply symbolic iconographical theme. What we do know is that a unique set of motifs and symbols occur in the wider region. Robert Chapple in his highly significant research on Killogilleen graveyard near Craughwell, has shown that motifs different to those commonly found in other parts of East Galway occur. We find some of the motifs discussed by Chapple reoccurring here in St Thomas'. For example the use of the Dextra Dei or right Hand of God in the act of handing down the Ten Commandments to Moses in Killogilleen also occurs in St Thomas'. The Ten Commandments are depicted in a very simplistic manner by the use of a set of ten Roman numerals contained within a heart shaped frame. This is a very rare piece of iconography in Co. Galway. What is of interest is that in St. Thomas' we find the Ten Commandments used in association with the Orb and Cross on a number of headstones; thus providing a common link to the crucifixion panel discussed above. These motifs have a peculiar regional bias and must therefore have a common inspiration and origin. Where did they originate from?

One factor worth researching further is the settlement after 1795 of a large number of Ulster Catholics in the Slieve Aughty region of Co. Galway. These families referred to locally as Oultachs, were dispossessed from their northern homes after the Battle of the Diamond. The Riley surname recorded on this headstone is a northern one, so should we be looking for a northern source for the type of symbolism used in Peterswell, Killogilleen, Killora and also in Kilchreest graveyard. This hypothesis is by no means resolved by the publication of this paper but rather placed in the public domain to encourage a response and fur- ther discussion. We do have one pillar stone in St. Thomas' bearing a vocational symbol depicting a hammer and stonecutters mawl or chisel dedicated to a man named Hearn. Is he the stone-cutter responsible for this work? Yet another question!

This interesting cluster of graveyards situated in the South East Galway countryside are candidates waiting for further study and academic analysis!