Headstones and stories from Abington, Murroe, Limerick - 'If Virtue be a Blessing Great' 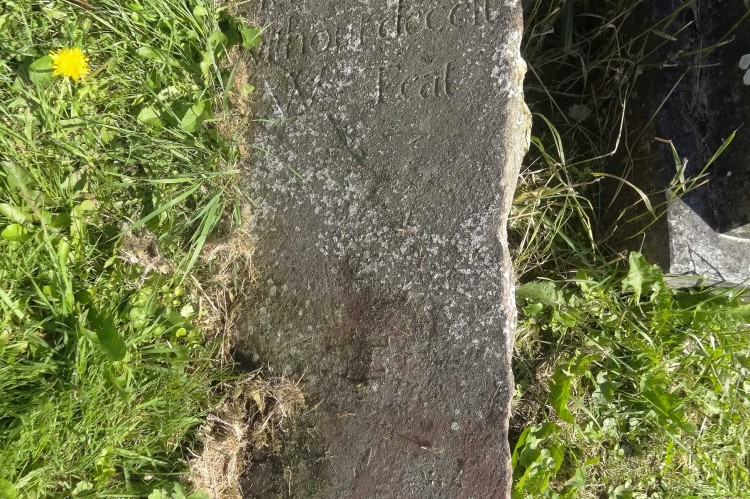 If virtue be a blessing great

Following yesterdays storm we started work in Abington graveyard this morning. We are training members of  the Murroe community (http://www.murroe.net/) to survey and record their historic graveyards as part of the Ballyhoura Historic Graves Project (http://visitballyhoura.com/index.php/home/) funded by LEADER. About a month ago we worked together in Clonkeen (http://historicgraves.ie/graveyard/clonkeen/li-clkn) graveyard and now we have reached the flagship graveyard of Abington (http://historicgraves.ie/graveyard/abington/li-abgn). The work is being done in cooperation with the Limerick county council's (http://www.lcc.ie/)archaeologist and so far we have trained community groups in over 20 graveyards in the county.

Today we geotagged 300 grave memorials and these are being processed now before being uploaded to the website. We then recorded about 100 memorial record sheets concentrating on reading the inscriptions. Abington has a rich collection of 18th century grave memorials and the headstones are carved in sandstone, limestone and Portroe slate. We expect to geotag up to 400 grave memorials tomorrow. One of the 18th century stones was signed with the initials TOD so we have a new stonecutter to trace in county Limerick. Maybe we will identify links to the stonecutters of the 19th century. We expect to find stonecutters in common with Doon (http://historicgraves.ie/graveyard/st-fintan-s/li-doon) and Caherconlist and Inch St Lawrence (http://historicgraves.ie/graveyard/inch-st-lawrence/li-istl) graveyards.

We heard a story of the Rainsford family who were wood cutters and joiners in the 19th century and we aim to record that story tomorrow. These may be a branch of the same Rainsfords we encountered in Doon last week  There is one remarkable headstone to John Humphrys which states the magnificent age of 115 years was reached but I expect to get clarification on this from Herbert Gow tomorrow.

Many headstones follow a particular formula in their epitaphs but one we encountered today was quite original, it read

If Virtue be a Blessing Great, Here Lieth One without Deceit, Wm Teat.

Tait is a name commonly found in Ireland today and in Limerick, I am told, it can be pronounced 'teat'.