The Dominican Priory in Athenry 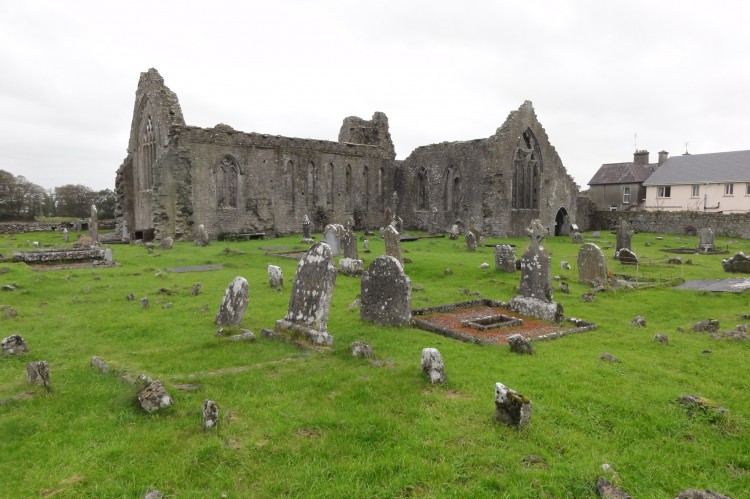 Eachtra have been monitoring excavations in Tuam associated with a new water supply scheme. Last week the ‘big dig’ as the works have become known moved to Athenry and next week Eachtra will be pre-excavating a trench along Abbey Row which runs just to the west of the Dominican Priory. I took the opportunity while planning next week’s excavations to have a look around the graveyard surrounding the priory building to the north and east. Happily and by pure coincidence I happened upon Fr Fergal MacEoinín and a polish colleague of his whose name I failed to record who were waiting in the graveyard for the caretaker of the church to arrive and open the locked door.Fr MacEoinín is a Dominican and parish priest in the Claddagh church in Galway. He has a great interest in the history of the Dominican order and has been recording, investigating and photographing all of the Dominican churches and Priories both ruined and upstanding. Fr MacEoinín’s photostream on Flickr - a photo sharing site - collates his photographs and also provides extensive commentaries and histories. The priory in Athenry was the earliest Dominican foundation in Connacht and acted as its primary foundation in the province throughout the high-medieval period. Fr MacEoinín and his colleague were there to have another look around the ruin before heading to smaller Dominican sites around county Galway. Having introduced myself I was invited inside the church and was astounded by the array of high-medieval grave slabs and the rich stone carving and decoration contained within.

History of the Priory

The priory was unusually located within the walls of the Anglo-Norman town however it was separated from the rest of the town by the River Clareen and may have been outside the original earth and wooden battlements surrounding the very earliest settlement south of the castle. Today the priory church appears squashed by housing development along Abbey row to the west. A ball alley was built against the western window and a viewing grandstand traverses the river to the west. The graveyard contains five high medieval grave slabs, eighteenth and nineteenth century memorial stones, modern headstones and a profusion of rough uncut and uninscribed memorial stones set in irregular rows.

The Dominican’s were invited to Athenry by Meiler de Bermingham to establish a foundation in the new Anglo Norman town in the thirteenth century. The priory was founded in 1241 and due to the largesse of both Anglo Norman and Irish noblemen the priory was ready to hold a Dominican provincial chapter in 1242. James Ware writing in 1654 compiled a history of the priory from a latin document now held in the British Library. All subsequent histories of the priory appear to be based on the history compiled by Ware from this possibly mid fifteenth century latin document known as the Register. Jim Mckeown (2009) in the Journal of the Galway Archaeological and Historical society has recently reassessed the primary evidence and has linked this appraisal to a fresh look at the architectural evidence in order to provide a detailed history of the priory. The Register suggests that Meiler de Bermingham built the church, Felim O’Conor built the refectory, Eugene O’Heyne the dormitory and Cornelius O’Kelly the chapter house. This cooperation between the Irish and Anglo-Normans appears to be reflected in the architecture with three tomb-niches in the south wall of the church of Romanesque and transitional style. These are late exemplars of ‘school of the west ‘ style architecture which was promoted by the Irish kings of Thomond and Connacht.

The priory Register records the burials of a number of these notable Anglo-Norman and Gaelic noblemen these include Meiler de Bermingham the founder of Athenry and his two sons William and Peter and Peter’s son Richard. Other names recorded include O’Flyn’s, de Burgh’s and O’Kelly’s. The grave memorials contained within the church today range from the thirteenth century to the modern period. There are at ten beautifully decorated high medieval grave slabs set into the floor of the church which is covered in loose stone or pebbles. They are tapered slabs decorated with carved crosses and fleur-de-lis motifs. Five of the slabs are very similar and may have been the product of a single craftsman. Macalister writing in the journal of the Royal Society of Antiquaries in Ireland drew and recorded these grave slabs in 1913. None of the grave slabs are now in their original location. One stone grave marker within the church was described by Rynne in 1988 as a coped grave cover. It appears to be a trapezoidal tomb-lid and has a carved cross on each of its gable ends. It was found in two parts during clean-up operation by the OPW in the 1970’s. Rynne believes that the lid may have been used to close the burial of Meiler de Bermingham himself. According to McKeown (2009) the sculptural architecture and the funerary monuments in the priory are symbolic of the wealth and status of Athenry and its de Bermingham lords.
Blog category:
Places