Desecration for Salvation; the case of John Cuming Macdona 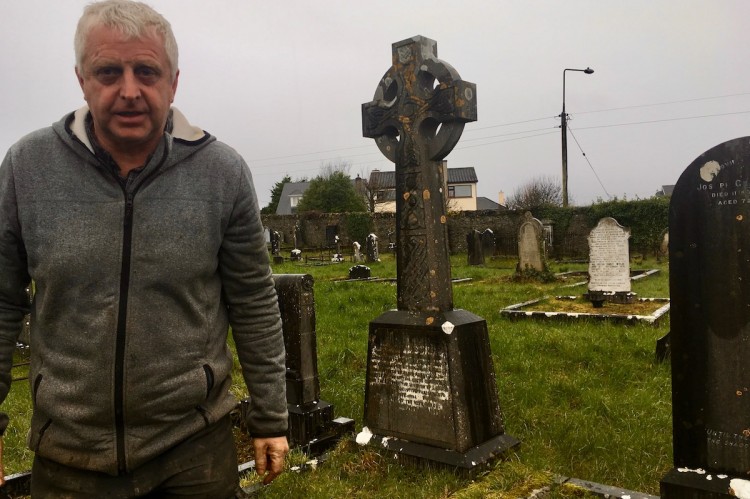 Catholics and Protestants are often buried together in Ireland.

Or rather, buried in the same place. The same burial ground.

We sometimes use different roads to get to the graveyard.

We sometimes use difference entrances into the same graveyard.

It's even been said some burial grounds have walls under the ground to stop our bones from mixing. We're a funny old crowd.

Very often we cooperate and help and bridge the gaps within communities but sometimes things break down and there is trouble. One fascinating tale of such a troublesome incident was told to us this time last year by Brian Scanlon, caretaker, chief gravedigger and local historian par excellence in Sligo Old cemetery. I'm not sure if it is Catholic V Protestant, and this story could even have resulted in cooperation between the two different branches of Christianity, but there is definitely religious doctrine at play.

John Cuming Macdona has a fine Celtic Revival Cross over his grave in Sligo Old Cemetery. Nothing spectacular but some nice interlace decoration. He has a conventional 3ftx 6ft grave plot and he holds the distinction of perhaps being the first formal cremation burial in Ireland in the modern era.

From a grand old family who restored Sligo Abbey in the 15th century, Macdona subscribed to the recently revived movement for cremation as a means to treat the dead and on his death in 1906 was cremated, presumably in London, and shipped home to be buried in the old Abbey in Sligo town. But agreement was not forthcoming for this, probably because burial was no longer allowed in the Abbey, and the ashes were to be buried in, the then new cemetery.

Unfortunately, the former barrister & MP's grave was desecrated immediately after burial. The outrage was reported in the press at the time and grave robbing (for the valuable urn) posited as the reason for the desecration. Rather a grim tale. But Brian Scanlon is dubious of the prevailing narrative. He says protest at the time of Macdona's burial was focussed on issues of doctrine. It was suggested that burying cremated ashes in the cemetery could have the affect of deconsecrating the ground. So Macdona's burial was seen as a threat to the sanctity of the ground for all Christians buried in the cemetery.

"OUTRAGE IN A SLIGO CEMETERY.
IN CONNECTION with the desecration of a grave the public cemetery at Sligo on Tuesday night, when a casket containing the ashes of the late MR. John Cuming Macdona was smashed and its contents scattered, the Sligo Corporation at a special meeting yesterday decided to offer a reward of £30 for the discovery of the perpetrators of the outrage. The Corporation also expressed their indignation at such a wanton act, And pledged themselves to do everything in their power to bring the miscreants to justice. The police are still investigating the matter, but up to last evening no arrest had been made. The ashes were contained in a marble urn which was enclosed in an oaken casket. The grave was opened, the casket smashed and the urn taken out and the ashes scattered. The urn and casket were left near the grave, as if those who had removed them went off in a hurry. Mr. Macdona was a barrister of the Middle Temple, and a descendant of Bryan Macdona, who restored Sligo Abbey in 1416. He represented the Rotherhithe division of London between 1892 and 1906. The ashes were sent on to Sligo from England four years ago to be interred. in the abbey. The Board of Works, it is said, raised an objection to the interment there, and the urn was buried in the cemetery. The theory generally accepted in the town is, that some persons heard that the ashes were contained in a silver or golden urn casket, and that it was with a view to stealing this that the grave was opened."

Reading this newspaper account I am very struck by the detail that the urn and casket were left near the grave. The journalist spins the tale that the culprits were disturbed in flagrante delicto hence failing to steal the 'valuable' urn. This doesn't wash now, it's more likely the culprits felt the cremated ashes were themselves desecrating the burial ground and their exhumation & scattering could remove the 'insult'. Imagine being with the gang who dug up the grave? Who was there? Butcher, baker, merchant, landlord, clergy? What did they say?

So, I cannot find out if the late 19th century/early 20th century Macdona's were Catholic or Protestant. It strikes me here that there was religious tension at play also mixed with class & status tension. The Macdona's may have been very high status but, as we are are all equal in death, local forces decided to impose their own justice when it came to the perceived threat to the consecrated ground.

Our grave monuments can be modest or they can be grand. But they always have a story to tell. Consecration is the story here.