A Decent Burial for Jack Harris. (contains reference to an Aboriginal death & corpse) 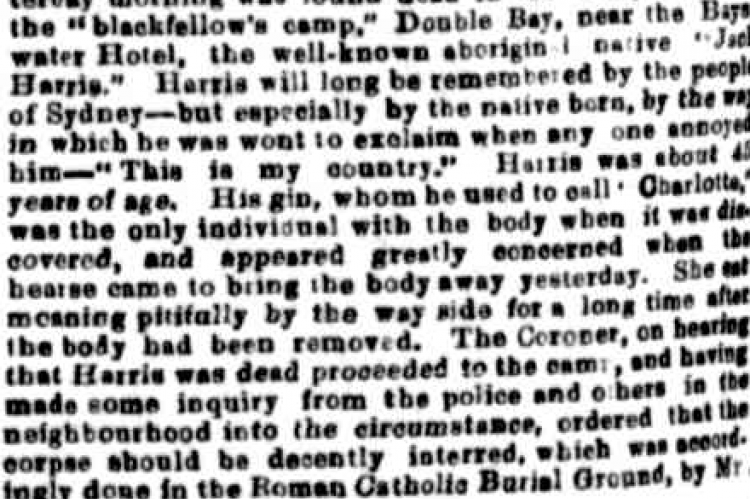 Decency has come up on this website before when discussing past and present burial practices. It seems an archaic term; reminds me of the way our teacher's used to talk in school in the 70s and 80s, and come to think of it, the word 'decent' pronounced 'daycent' was regularly used by Cork teenagers in those days, meaning good or great. 'We're playing Carrigaline in the semi-final!' 'Daycent, we beat them last time!'. But when used in the context of burial it refers to respectful treatment of the dead.

A super project and book (https://www.coastalsydneystories.com/blog) recording the continued presence of Aboriginal populations in Sydney Harbour has an interesting example of 'decent' burial in a cross-cultural context. Dr Paul Irish refers (https://www.coastalsydneystories.com/single-post/2017/02/13/Last-of-the-...) to the death in 1863 of an Aboriginal man named Jack Harris. Mr Harris was found dead in the 'blackfellow's camp' DoubleBay, Sydney. Irish links to a contemporary newspaper account of Mr Harris's death which states "The Coroner, on hearing that Harris was dead proceeded to the camp ... ordered that the corpse should be decently interred, which was accordingly done in the Roman Catholic Burial Groun, by Mr Curtis, the undertaker." (https://trove.nla.gov.au/newspaper/article/60522691)

So Mr Harris received a Catholic burial even though we do not know what religion he was. Perhaps the coroner established that he was Catholic. Perhaps the coroner and the undertaker came up with, to them, a practical solution to their problem. Which is to mean, it wasn't necessarily the solution Mr Harris or his family would have chosen but maybe the nature of the cultural powerlessness of the Aboriginal Sydney people meant they had no say in the matter. Be that is it may, the coroner and undertaker were driven by the need to provide a decent burial - decent in terms of their Christian faith, and also in terms of sanitary health.