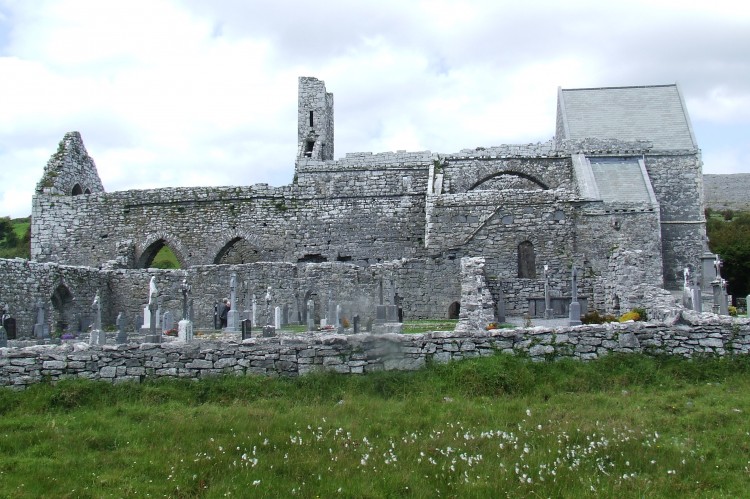 Corcomroe Abbey is an early 13th century Cistercian foundation nestled at the head of a south west facing valley in the northern portion of the Burren in Co. Clare. On a recent family camping trip to Fanore we stopped off at the Abbey for a look around and were rewarded by a beautifully presented and partly re-roofed ruin. A well tended graveyard with some modern graves, surround the ruin to the south and east. The interior of the Abbey is also covered in memorial stones some dating to the late 17th century.

The dedication of the Abbey is to St Mary of the fertile rock which could really be a description of the Burren as a whole; a place noted for its barren rocky moonlike appearance but also for the richness and diversity of the flora.

Following a series of synods in the 12th century the Irish church underwent a number of reforms. These reforms saw the introduction of European religious orders such as the Cistercians. Another one of the reforms was the dividing of the country in to a series of church units or dioceses. These for the most part were based on secular territorial divisions which already existed. The diocese of Kilfenora as set out at this time would have been co extensive with the territory controlled by the Corcu Modruad chiefdom and this was split into two baronies with the western example being the barony of Corcomroe.
The Abbey is supposed to have been founded by Donal Mor O’Brien in 1182 but is more likely to have been founded by his son also Donal in 1195. The O’Brien’s were the Kings of Thomond and were the founders and benefactors of Corcomroe. They were also responsible for several other important religious houses in Thomond which include St Flannans Cathedral in Killaloe, St Mary's Cathedral in Limerick and Holy Cross Abbey.

The Abbey was built to a standard Cistercian plan, however, some failings in keeping to the standard geo-metrical scheme have been observed and resulted in some obvious defects. Stalley (JRSAI Vol. 105, 1975) in his discussion of the architectural history of the Abbey felt that while the craftsmen who built the church were outstanding masons they were not outstanding architects. The choir is constructed in stonework of a very high quality, with the roof bearing some finely carved rib vaulting. Some very fine decorated stone work can be seen including human masks and depictions of dragon’s heads on the presbytery quoin stones. Some of the carved capitals have been especially noted as the floral motifs are quite unusual. The natural botanical carvings appear in this remote Cistercian abbey up to fifty years before they became in vogue in continental gothic architecture (Stalley and Nelson, Gesta, Vol. 28, 1989).

In a low niche tomb in the north wall of the eastern section of the Abbey is an effigy to Conor O’Brien who died in a great battle nearby and was laid to rest in Corcomroe in 1268. This interment was commemorated by a poem titled ‘Corcomroe’ in The Irish monthly in October 1911 by R.M.G:
Conor O'Brien of the kings.
How sound you sleep in Corcomroe!
The night wind in the choir sings
The hymns of many a year ago.

What day was that when you were borne
By warriors from the field of red !
Your blade was broke, your side was torn:
They laid you in your royal bed.
They ripped the chancel's paven floor
And laid your warriors there in rows:
Their requiem is the tempest's roar,
Their souls are sped where no man knows.
The effigy is one of the very few examples remaining of an Irish chieftain. The Clare County Library describe the monument;
‘It shows the King wearing a crown decorated with fleur de lys, the left hand holds a scepter and the righta  reliquary suspended from the neck of the figure. His robe falls in long pleats to below the knee while the figure appears to lie on a cloth with the feet resting on a cushion.’
At a recent Historic Graves workshop in Ennisnag Co. Kilkenny a similar 13th century effigy was recorded.
The Abbey at Corcomroe offers the visitor a vivid experience both in terms of the natural surroundings and in terms of the rich medieval stone carvings including the fine 13th century tomb of Conor O’Brien. The Abbey features in the innovative Clare Ecclesiastical Trails iPhone App.
For a detailed and interesting description of Corcomroe Abbey and other archaeological sites in the Burren and onthe Aran Islands check out The Burren and The Aran Islands: Exploring The Archaeology by Carleton Jones.
Blog category:
Places