A cemetery at Monte, Madeira 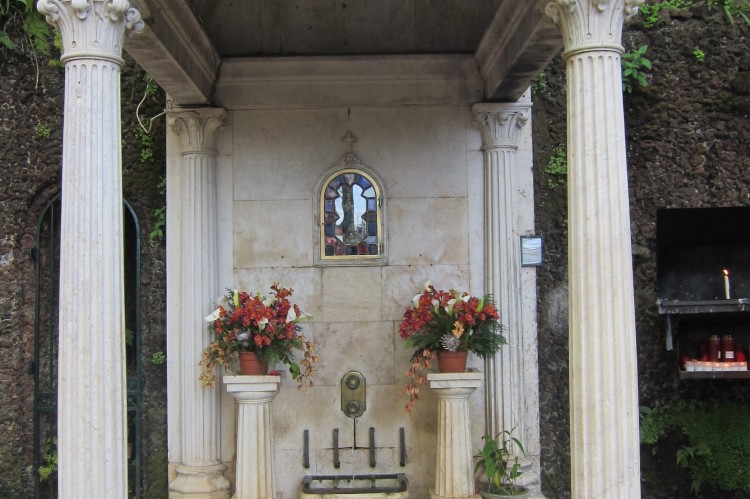 In February 2010 the island of Madeira was hit by a series of storms which resulted in major floods and landslides, causing at least 42 deaths. The floods and mudlsides appeared in the world's media (Sky, CNN, Youtube) but little is heard of the disaster today as newer envromental catastrophies have struck other countries. But the cemeteries of Madeira do provide some insights into the human costs of the storms.

In the upper northern suburbs of Funchal, the cemetery at Monte, gives silent, heartful, testament to the repercussions of the storms of 20 February 2010. Monte is famous as a place of pilgrimage to the springs and church of 'Our Lady of Monte' in Madeira since late medieval times. Early in the twentieth century the Last Emperor of Austria, Karl of Hapsburg, fell foul of European politics and was exiled to Madeira where he died in 1922 and was beatified in 2004 -so the church has become a place of 'pilgrimage' for Austrian tourists too.

Besides visiting the Church of Our Lady of Monte, the world famous gardens in Monte, or taking a tobaggon ride down the Caminho de Monte, it can be worthwhile to visit the cemetery in Monte to get a better understanding of the people of Madeira and how they have faced the challenges of remote island life. Madeiran cemeteries are organised differently to Irish graveyards. All plots are numbered and assigned to a family or individual for a set amount of time only and the remains are transferred to wall chests for longer term interment.
In Monte, the cemetery is organised in a number of lettered sections. The section inside the main gate on the right is full of very recent graves - many of the people buried here appear to have died during, or very soon after, the events of 20 February 2010. Flat white marble memorials with coloured photographs of the deceased at the southern end of the grave plot and many plots are outlined with simple, stand-alone, wrought-iron frames.

Two graves, side-by-side, for a young woman and a young man, share a surname and the woman's name is double-barrelled. The wrought-iron frames on each grave are interconnected with a smaller wrought-iron bridge. This must be a married couple and they both died in late February 2010. Are the cards and notes in the plastic pockets taped to the memorial plates from their children or from nieces and nephews? Are they from grieving parents? One cannot intrude and read the cards but it would be good to meet the relatives of the deceased and to listen to their stories of the deceased. How did the couple die? How did they live?
When we visit foreign countries cemeteries can be just as revealing about life and death in that country as they are at home, in Ireland. Social hierarchies, religious beliefs, trades, vocations and family relations can be revealed inside the graveyard walls just by paying attention.
Blog category:
Places