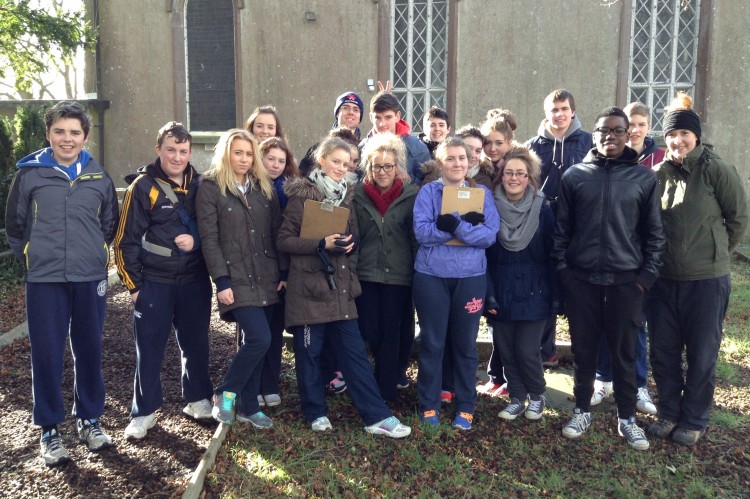 This report is about a training programme organised and funded by the Kilkenny Leader Partnership and is written by Kate Parsons who is part of a Transition Year class run by Ms. Helen O'Connor of Abbey Community College, Co. Kilkenny. The survey is part of a training project funded by Kilkenny Leader Partnership. The students are basing their survey on work by Michael O'Sullivan published in Decies 1994-1997.

We are a Transition year class who took up the Historic Graves project as the main topic in our Environmental Studies module. At first I think that everybody was apprehensive to what we would have to do in this project, none of us really understood it, although, as the project was explained to us, we all started to see how exciting this project would be.

Leading up to this project, we had researched the topic for 3 weeks before our two day course. Our two day course took place over two days and our survey was part based on a survey done in the 1990s by Michael O'Sullivan who must have spent a long time in Abbeylands graveyard deciperhing all of the headstones. .

On the first day of our course, we were unfortunately hit with Ireland's prime weather type -  rain (and cold). This didn't hold us back that much; we still got a number of things completed on this day.

We started off the day by going down to the graveyard, where we learnt about this particular graveyard and we met John Tierney from Historic Graves. After this introduction, we were put into work groups. There were 3 groups, a numbering group who put number onto each grave by writing a number onto masking tape and putting it onto the side of the gravestone. The second group is the photographic group; this group took one photograph of each and every grave in the graveyard. The third group recorded the names on the headstones.

Then it did started raining, and we had to head inside; we didn't stop working, we learned about the numbering system used in the previous survey and we also learned how to tell our own histories by focusing on WHO, WHAT, WHERE and WHEN. Some of my class mates researched their own family stories and recorded them on video.

On the second day, we were fortunate in that we had no rain, thankfully! We got down to the graveyard in the morning, all wrapped up in hats, scarves and gloves! We started on our work immediately; I was in the data recording group. This group was made up of 10 pairs of people; each pair got a set of numbers. E.g. - I got numbers 1-20, and there were 20 graves in one section that the numbering team had labelled with the numbers between 1-20, what we had to do was write down E.g. - number 10 and find the grave that was labelled number 10, we then wrote down the name that was on that grave, and so on for 300 graves!

The numbering team finished off the numbering of the last 100 graves, the photograph team finished off photographing the graves and a group of four people from the class are now making videos in which they talk about their families, their family members are not in the graveyard, but it does show that people how interesting it is and what you find out when you ask about family members!

Our last thing to be done now over these two days is to match up the names that we had recorded in the graveyard to the names on the record sheets.

I really enjoyed doing this project, no matter how cold it got at times. There is something special in the feeling that we could be helping people find lost family members from all over the world.

What I found interesting in the graveyard was the way that some graves dated back so many years, the oldest I saw was from the 1730s and written in Latin, and even the old English used on some of the graves is interesting! we learned about the long s, and ye=the.

What I also found was interesting was that some of the families were so big, they had many family plots and many people were in each plot. I would love to learn more about these families and the symbols on top of some of these graves!

I would recommend anybody to do this project as you learn much about the graves and much of the history from around the local area!